Crusader Rugby Takes on Catholic U This Weekend 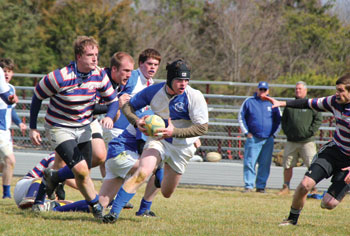 The Crusader rugby team is scheduled to play The Catholic University of America (CUA) Cardinals on Saturday, March 17 at 11 a.m. The game, which will be the team’s third of the season, will be held on CUA’s campus in Washington, D.C.

Earlier this season, in its first-ever home game, the Crusaders defeated the American University Eagles by a score of 40-7. Prior to that, they had lost to the University of Maryland-Baltimore County (UMBC).

The Crusaders are excited to play the Cardinals, formerly an NCAA Division I team, and look forward to having many Christendom students and alumni in attendance to cheer them on.