Christendom College is pleased to announce that Reverend Kenneth Baker, S.J., and Mother Agnes Donovan, S.V., will join the 100 members of the Class of 2012 for commencement exercises over the weekend of May 11-13, 2012. 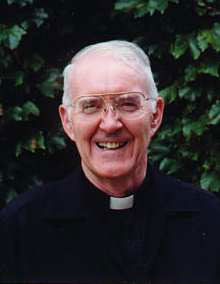 Father Baker will offer the Baccalaureate Mass on Friday, May 11, and will be awarded an Honorary Doctorate from College President Dr. Timothy O’Donnell at the Commencement Exercises on Saturday, May 12.

Father Baker was the editor of Homiletic & Pastoral Review for the past 40 years, and currently serves as Editor Emeritus of the online edition. He made his perpetual vows in the Society of Jesus (the Jesuits) in 1949, and was ordained to the priesthood in 1960. He earned his Ph.D. from Marquette University in 1967 and spent a number of years teaching at Gonzaga University in Washington. After serving as the president of Seattle University for almost year, in 1970, he resigned and moved to New York where he began his role as editor of Homiletic & Pastoral Review.

On Saturday, May 12, Mother Agnes Donovan, S.V., the Superior of the Sisters of Life in New York, will deliver the Commencement Address and will be awarded with Christendom College’s Pro Deo et Patria Medal for Distinguished Service to God and Country.

Mother Agnes was one of the first women to respond to then-Archbishop of the Diocese of New York John Cardinal O’Connor’s inspiration for the Sisters of Life, a religious community of consecrated women who, by way of a fourth vow, are dedicated to the protection of the sacredness of human life. She received a Ph.D. in Psychology from the University of North Carolina at Chapel Hill in 1985 and served as a professor of psychology at both Columbia University in New York City and The College of William and Mary in Williamsburg, Virginia. She is a licensed Clinical Psychologist and a certified School Psychologist both in New York and Virginia.

The 100 graduates of the Class of 2012 represent not only the largest in the college’s history, but also one of the most diverse in that it includes students from England, Japan, Canada, Kenya, and the U.S. Additionally, 38 of the graduates have siblings who are Christendom alumni, and 12 are children of alumni. The graduates scheduled to receive B.A. degrees include:

One Associate of Arts will be conferred on Jessica Inzeo.