College Mourns the Loss of Former Board Member McGraw 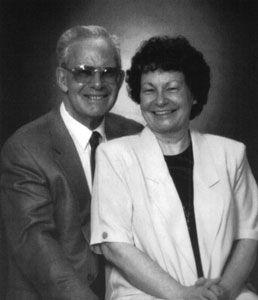 Bill McGraw with his wife, Onalee

Married for 48 years to his wife, Onalee, Bill was the father of three Christendom alumni, and grandfather of two current students.

When Christendom was being formulated in the minds of Dr. Warren Carroll, back in the mid-1970s, both Bill and Onalee McGraw were very involved and were among the first supporters of the College, with Onalee serving as the first Chairwoman of the Board of Directors of the Christendom Educational Corporation.

Bill served on the College’s Board for 19 years, and was an invaluable asset to the College during that time.

Bill, who earned his law degree from the University of North Dakota, spent most of his working career in D.C., where he joined the Board of Contract Appeals of the U.S. Department of the Interior, and eventually served as Chief Administrative Judge until his retirement in 1992.

“He faithfully served the College as board member and took his duties very seriously,” Executive Vice President Mark McShurley said. “As a lawyer, he brought an much-valued expertise to the board, playing an important role in the earlier years of the college. He and his family will be in the College community’s thoughts and prayers.”

He is survived by his wife, Onalee McGraw; three children, Laura McGraw Clark of Front Royal, Father Stephen McGraw, a Catholic priest of the Diocese of Arlington, VA, and Tom McGraw of Manassas, VA; and fifteen grandchildren.

A Rosary will be held on Thursday evening at 7:00 p.m. at Maddox Funeral Home and the family will receive friends following the service until 9:00 p.m.

A Mass of Christian burial will be held on Friday at 1:30 p.m. at St. John the Baptist Roman Catholic Church in Front Royal, offered by Father Stephen McGraw. Interment will follow in Panorama Memorial Gardens in Waterlick. A reception will follow in the fire hall located on Commerce Avenue. All are invited to attend.

Memorial contributions may be made to Christendom College, 134 Christendom Dr., Front Royal, VA 22630.