Vatican’s Ambassador to the US, Papal Nuncio Vigano, Visits College 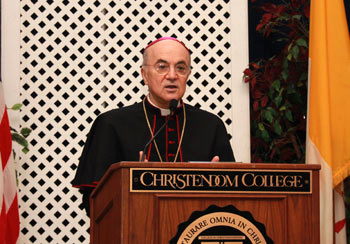 Archbishop Carlo Maria Viganò, Papal Nuncio to the United States, visited Christendom College on March 18. His first visit to the campus of a Catholic college, the archbishop celebrated Mass for the students and faculty and then joined them for brunch.

Pope Benedict XVI named Archbishop Viganò to be the nuncio to the United States in October of last year. His previous position was the secretary-general of the commission governing Vatican City.

“This morning, it is my particular joy, as a personal representative of his holiness Pope Benedict XVI, to celebrate holy Mass with you, my brothers and sisters of Christendom College,” Archbishop Viganò said during his homily.

“As you make your spiritual journey towards Easter, take time to thank almighty God for the gift of the present moment—the gift of these days that you spend at Christendom College, where you have been given a unique chance to choose to live by the truth, by embracing the fullness of the light of the Faith,” he said.

During remarks later given during brunch in the St. Lawrence Commons, his Excellency urged students to stay united to Christ in every aspect of their lives, from studies to sports. He also commended the college for its dedication to the Holy Father and for its junior semester in Rome program.

“[Your semester in Rome] is not only a geographical unity, but it really is a unity of love and faith,” he said.

“It was a great honor for us to host the official, personal representative of our Holy Father Pope Benedict to the United States,” College Chaplain Fr. Donald Planty said. “The Nuncio was impressed with Christendom College—he noted that our Catholic identity is strong, that our academics are properly grounded on faith and reason, that our celebration of the sacred liturgy is most reverent, that our students are enthusiastic and engaging, and that our campus is beautiful. He enjoyed his visit very much and I trust he will be back.”

Senior Jane Kokes and many other students were able to meet with Archbishop Viganò. Kokes had a rosary blessed by the Nuncio and received a special blessing herself.

“He was so kind to the students,” Kokes said. “You could tell that he really cared about you. Being able to meet with this great leader of the Church was an incredible experience—it was such an honor to have him at our school.”

The nuncio’s homily can be heard at Christendom on iTunes U.