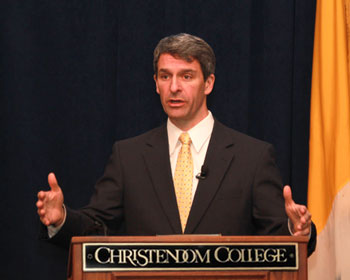 Virginia’s Attorney General, Kenneth Cuccinelli II, spoke to the Christendom College community on the topic of “Living the Catholic Faith in Politics and Government” on April 2.

Before a crowd of about 400 college students, faculty, staff, and guests, Cuccinelli, who plans on running for the Governorship of Virginia next year, encouraged all present to be active in the political process and to be Catholic leaders in all areas, but particularly in the areas of science, media, and politics.

“Every single thing that government does to expand its power, comes directly at the expense of your liberty,” he said. “It’s not enough to be a faithful Catholic and learn the tenets and precept of our faith. We have to be actively Catholic—engaging and leading the world around us.”

A key opponent to the HHS mandate, Cuccinelli said that the Obama administration has delayed many regulatory decisions until after the November elections, but in the case of this mandate, he thinks they made a fatal mistake.

“There is an easy way—well a simple way—to get out from underneath that mandate, and that’s get a new president,” he said. “We need to elect people that will follow and uphold the Constitution.”

Cuccinelli explained that the mandate is a great assault on freedom in America and that there are three ways that government decreases liberty: more spending, more taxes, and more regulation.

“The reduction of liberty will continue,” he said. “It is necessary for the effectuation of the policies in that health care bill. Assume the Supreme Court upholds it. This mandate is only the beginning. There will be more denials of your choice and options of how you live your life and how you die. Because your liberty has been taken from you in that piece of legislation.”

Addressing the field of science and alluding to “alleged global warming,” Cuccinelli said that there are some scientists who are not even practicing science.

“There are an enormous amount of scientists that start with a presumption and a conclusion and they drive everything they do to that conclusion,” he said. “If science is suppose to be a search for truth, that is backwards. Well, in fact, it isn’t backwards, it isn’t science—it might be political science—but isn’t actual science.”

Many students lingered after the talk to meet the Attorney General and discuss the topic further.

Turning to the media, Cuccinelli advised students to train themselves to read with a critical eye.

“People in that industry can be decidedly antagonistic… to absolute truth and that there could be absolute truth,” he said. He asked students to get involved in the media, report the truth, and use it to spread God’s message of love.

Concluding, he implored the students to get involved in the political process.

“It’s not enough to just know the issues and vote right,” he said. “The world is changed by those who actively engage it… the world is a place where people of faith and character are needed now more than ever to be leaders in their fields and examples for others.

This insightful and inspiring lecture can be heard at Christendom on iTunes U.