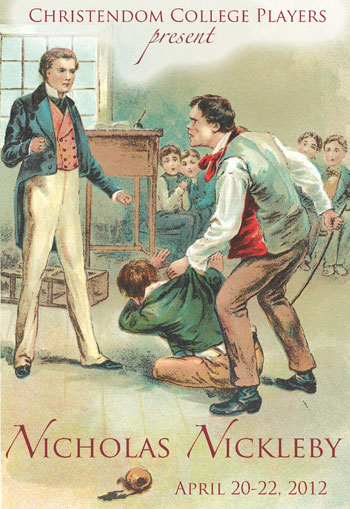 The Christendom College Players will present Nicholas Nickleby on April 20-22 at the Warren County Middle School auditorium in Front Royal, Virginia. Nicholas Nickleby is an adaption by Gregory Blair of the beloved novel by Charles Dickens.  Featuring a complex plot filled with incredibly colorful characters, the play contains just about everything one could hope for from Dickens.

“NickNick, as it is sometimes called, has a rich theatrical and cinematic tradition,” Keats says. “Two fine film versions have been made based on the story, each showcasing a cast of great British and American actors.  Even more significant, though, was the gargantuan, eight-hour production of the play performed in the 1980’s by the Royal Shakespeare Company. Christendom’s somewhat more modest two and a half hour production nevertheless captures the essence of the story, along with its major plots and characters.”

The play includes Dickens’ trademark hilarious comic scenes; lurid melodrama when Nicholas has to defend the persecuted schoolchildren against their sadistic tormentors; two highly romantic subplots, as both Nicholas and his sister, Kate, find their true loves in London; and a rousing conclusion as Nicholas, with the help of two kind-hearted brothers, attempts to save the life of a poor crippled boy named Smike.