Unemployment rates in the United States spiked to 10% in 2009 and have had a tough time coming back down. The current job market finds employers seeking the best—employees that will make their company excel, even in a tough economy. One IT company, immixGroup, has found an excellent source of exemplary personnel in Christendom alumni.

Five Christendom alumni are working in technology sales for immixGroup. Located in McLean, VA, immixGroup’s goal is to help companies grow and manage their public sector business while providing their government customers with reliable access to the technology products and services they demand. The company has had such a successful experience with Christendom’s alumni that they are looking for more to join their teams. 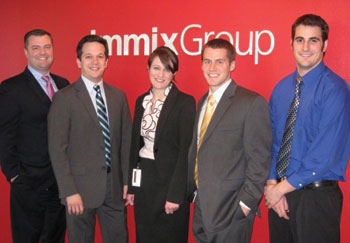 “They are a ‘must interview,’” says Cindy Carci, Director of Sales at immixGroup. “They have a great work ethic which follows the ethics you teach at the school. They are bright with a penchant for continuous learning. I found that they have all the traits you want your own child to have – truthful, courteous, good interpersonal skills, respectful, and grateful.”

Alumni Steve Storey (’00), Daniel Corey (’03), Maureen Dalley (’10), Ryan Doughty (’10), and Peter McNeely (’12) are excelling in the work at immixGroup, thanks to their Christendom liberal arts education.

Doughty is an account manager and has wanted to get into sales since he was in high school. At immixGroup, he works to build relationships with various government agency representatives and their channel partners in order to secure quotes and sales of company software and other products. He has found that within the business world, companies are looking outside the norm for future employees.

“This benefits liberal arts majors,” Doughty says. “Not only are we getting a well rounded education, but we have the ability to train and the willingness to learn—and that’s what these technology business companies are looking for within future employees.”

A history major, Doughty says that his education has also assisted in his business writing and gave him a drive to excel within the company.

McNeely, who finished his coursework for a major in political science and economics this past December, is also an account manager with the company. Like Doughty, he believes his
Christendom degree has given him an edge at the start of his career.

McNeely describes skills like networking, communication, and the conveying of ideas as integral parts of the business.

“Whether you are trying to argue supremacy of the Jewish religious culture in Dr. O’Donnell’s Ancient Biblical World class, or debating a bioethics topic in Dr. Mashner’s Apologetics, or attempting to market your product and services in sales—being able to convey your ideas and express your thoughts well is an invaluable skill to have,” McNeely says. “That is one very visible way that those skills that you hone at Christendom are immediately transferable into the sales world.”

McNeely says that Christendom did not just give him the skills needed to succeed, but also a mission for life: “to restore all things in Christ.”

“We may not all do great things for the Church itself,” he says, “but many of us must ‘restore all things in Christ’ by the silent, unnoticed witness that we give to Christendom, to our Church, and our Faith.”

Doughty recalls the words attributed to St. Francis of Assisi, “preach the Gospel at all times and when necessary use words.”

“Most of the colleagues I work with are of different faiths and backgrounds,” Doughty says. “So I try to be an example of Christ to my fellow employees, while also respecting the workplace.”
Storey, Dalley, and Corey work as account managers as well.

The dedication and example of these alumni is witnessed by all–including their supervisors.

“We appreciate the fact that they are present every day and are continuously focused on getting to the end of a job,” Carci says. “They all seem to have a unique quality—loyalty—which we value most of all.”