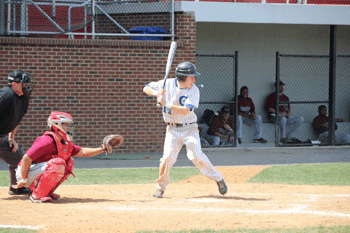 On April 21, the Christendom College baseball team defeated Valley Forge Christian College at Bing Crosby Stadium in Front Royal, Va., winning the 2012 Eastern States Baseball League (ESBL) Championship. The double-header victories capped off a memorable season by a team who did the little things and did them well.

The first doubleheader started with Senior Patrick Stein on the mound. Stein pitched a complete game, which included nine strikeouts, just one walk, and four hits. Offensively the Crusaders continued their turn-around at the plate this year as they repeatedly put the ball in play forcing the Patriots of Valley Forge to make tough plays. The result was a 3-0 victory for the Crusaders in the first game.

Freshman Thomas Maurer took to the mound for the Crusaders in the second game. The defense, as it has all year, were as reliable as the bats of the Crusaders, gobbling up ground balls and chasing down fly balls. In the sixth inning, sophomore Joe Marra got on base and stole his way to third base.  He then raced home to score on a passed ball and the excitement became tangible as the Crusaders sensed their first ever championship almost in their grasp. Following Joe Marra, Mike Arnold also scored to give the Crusaders a two-run lead going into the final inning.

Pat Stein then came back on the mound to close out the second game and help clinch the championship. Three batters later, the Crusaders clinched their first winning season in over five years and their first ever ESBL Championship.

“I had to beg coach to let me go out there, but it is one of those things that I wanted so bad,” Stein said about closing the second game. “To be in that situation after four years and to be able to help deliver a championship means so much.”

Coach John Mercandetti was very pleased with the men’s ability to work as a team.

“These two wins, just like the others before them, were a complete team effort,” Mercandetti said. Everyone played a part and fulfilled their role so well and I couldn’t be more proud of their hard work and team first mentality.”