Christendom’s Chairman of the Board Defends Vatican’s Decision to Reprimand U.S. Nuns

Mrs. Donna F. Bethell, Esq., Christendom College’s Chairman of the Board of Directors, has been making headlines for her staunch defense of the Vatican’s recent decision to make sweeping reforms of The Leadership Conference of Women Religious (LCWR), which comprises the heads of approximately 95% of the nation’s women religious. 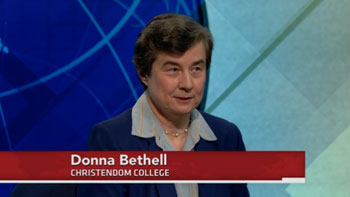 Appearing on the “PBS Newshour” with Judy Woodruff on April 19, Bethell went head-to-head with Fordham University’s Jeannine Hill Fletcher, a self-described “feminist theologian,” on the topic of the recent ruling from the Congregation for the Doctrine of the Faith that criticized some of the statements of the LCWR and called for a reform of the group.

The Congregation for the Doctrine of the Faith cited addresses at LCWR conferences that, it said, manifested a “rejection of faith,” protests of Church teaching on homosexuality and the ordination of women by officers of the group, and a “prevalence of certain radical feminist themes incompatible with the Catholic faith” in some of the conference’s events.

She continued to explain that the Vatican is uneasy with some of the doctrinal positions the group holds and promotes, particularly on the issues of abortion, homosexuality, and women’s ordination to the priesthood.  But according to Fletcher, there’s room to debate on these issues.

“At Vatican II, in the 20th century, there’s a very different understanding of the relationship of the Catholic truth and the Catholic faith to the truths and faiths of people of the world. And so to suggest that there are some things that simply will not change, I’m not sure that that’s been the tradition of the Catholic Church.”

Following the airing of this dialogue, a number of progressive news outlets, The National Catholic Reporter, specifically, went after Bethell for her views, and attacked her personally for her beliefs in Church teachings and her association with Christendom College.

On April 23, Bethell was a guest on National Public Radio’s “Talk of the Nation,” hosted by Neal Conan, along with John Allen, senior correspondent of The National Catholic Reporter and Sister Simone Campbell, executive director of NETWORK.

“The Church is Christ here on Earth, and the authorities in the Church who speak authentically for the Church are the voice of Christ,” she said. “We call the pope the vicar of Christ. So it’s not that you can – that’s why we say you cannot simply pick and choose among the essential teachings of the Church. You have to – if you accept one, rationally, you have to accept all of them because they all have the same source.”

“I think that there are teachings within the Church, but at the core of our faith is Jesus, and our belief that our way is to walk with Jesus, and that we are one body. The whole of creation is one body. And that walking as Jesus walked, when you look at what Jesus did, it’s to be in relationship with those at the margins of society…Our mission in the Church as Women Religious is to the people of God. The bishops are doing their work and their mission as a Church, which is to protect the institution and the institution of the Church. Those two missions are often historically in conflict, and that’s what we have here right now, is a small, little dustup around the different of – difference of mission.”

Bethell will be making more radio and TV appearances in the near future to talk about this most important issue. She will be doing a half-hour TV interview with the Voice of America today and another PBS national program next week. Please keep her in your prayers as she defends the truth of Christ in the public square.