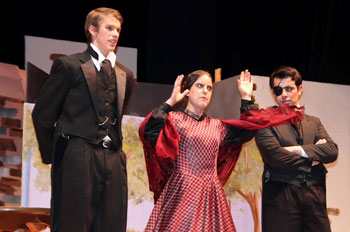 The Christendom College Players performed Nicholas Nickleby on April 20-22. An adaption of the beloved novel by Charles Dickens, the play featured a talented cast that entertained audiences with a complex plot filled with colorful characters.

Mathew Harris and Kathleen Deighan brought the stage to life with their performances of Mr. and Mrs. Crummles, the leaders of the larger than life theatre troupe that Nicholas joins for a short time.

Sophomore Sean Ryan and freshman Joseph Bond kept audiences laughing with their hilarious performance of Charles and Ned Cheeryble, the kind and jovial brothers who help Nicholas in overcoming the evil designs of his uncle Ralph.

Senior Matthew Camp, who played the sadistic Wackford Squeers, said that performing in Nickleby was a wonderful experience.

“Not only did I get to work alongside some fabulous, motivated, upbeat actors but everyone, from cast to directors to stage crew to the hair and makeup, really worked together to provide a positive, and all around delightful performance,” Camp said. “I was truly glad to be a part of it.”

Andrew Clark, a sophomore who played Newman Noggs had an amazing time as well.

“It was a tremendous experience,” Clark said. “It’s always great working with people who are very dedicated, patient, and willing to go the extra mile to make the play amazing.”