Christendom Students Entertain and Raise over $7,000 for Senior Class Gift 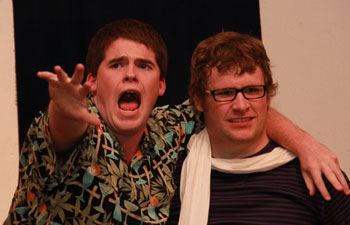 Christendom College’s senior class raised over $7,000 for its class gift at the annual Mystery Dinner Theatre, held on campus April 27-28.  The dinner and play production, entitled Lights! Camera! Murder!, was set in Hollywood and was written by seniors Molly Morey and Tim Ginski, and directed by senior Meghan Kelly.  The play kept the audience laughing as it showcased Christendom’s dramatic and comedic talent.

“It really was a pleasure to join Meghan and Tim in the writing and directing processes of Mystery Dinner Theatre,” Molly Morey said.

Students rehearsed for ten weeks, giving countless hours to develop their characters, memorize lines, and incorporate “improv” into the script.

“It paid off,” Morey said. “The last performance on Saturday was phenomenal—a great audience that was laughing for the entire show, a Hollywood-themed decorated venue, and the entire cast was so creative and absolutely hilarious. I think I laughed as if I had never seen the play before—though I had watched the actors run over scenes countless times.  I just really had a great time being a part of it all.”

During dinner, the play’s characters ate with the audience in character.  The characters also came around to the tables after the murder was committed and solicited the audience’s help in solving the mystery.  The first table to correctly guess the murder won a special prize.

“Each year I am impressed with the talent and drive of our students,” Student Activities Director Caitlin Bowers said. “This was a 100% student run event that takes a lot of leadership and organization—they did a great job.”

This year’s senior class gift will enhance the patio located outside the Sacred Grounds Café in the lower level of the St. John the Evangelist Library.