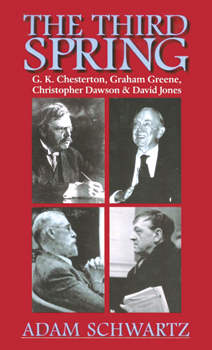 Associate Professor of History Dr. Adam Schwartz has recently seen the publication of his book, The Third Spring: G.K. Chesterton, Graham Greene, Christopher Dawson, and David Jones in a paperback edition by The Catholic University of America Press.

“It was a very pleasant surprise,” Schwartz says of the issuance of his study in paperback. “Most academic titles do not make it to paperback these days, so I am very flattered, and humbled, by the press’ regard for my work. I hope that its availability in this format will bring more readers to an appreciation of these authors and their achievement.”

Originally published in 2005, The Third Spring profiles the spiritual journeys and religious and cultural beliefs of four seminal members of the Catholic literary revival in twentieth century Britain. Although British Catholics were a “rejected minority” for much of modern history, they saw remarkable renewal in the twentieth century, as a disproportionate numbers of the ages’ leading minds joined their ranks as converts. They did so at a time of growing secularization, regarding Roman Catholicism as a superior explanation of life’s meaning and direction than that proposed by the “confident agnosticism” ascendant among the literati.

Each of Schwartz’s subjects was an acknowledged leader in his field of work—Chesterton as a man of letters, Greene a novelist, Dawson an historian, and Jones a poet—and together they made lasting contributions to British intellectual life while making Catholicism an indelible part of modern British culture.

The Third Spring has been highly acclaimed since its publication. Stratford Caldecott of the Chesterton Institute for Faith & Culture called it “a remarkable, indeed a staggering book…a brilliant study.” Dr. Trevor Lipscombe, Director of the Catholic University of America Press, echoed this praise when announcing the paperback edition, terming Schwartz’s study a “notable
work…of lasting influence.”