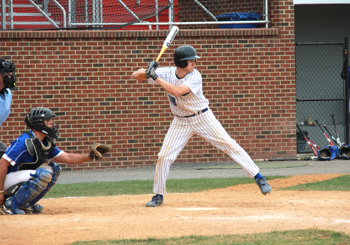 Five Christendom College baseball athletes were nominated for the United States Collegiate Athletic Association (USCAA) National All-Academic Team. The athletes met or exceeded the required minimum of a 3.5 GPA during a season in which the team won the Eastern States Baseball League Championship.

Senior David McWhirter, juniors Nicholas Blank, Mike Bobrowski and Charlie Rollino, along with sophomore Matt Speer, all made the All Academic Team.

“We are very proud of these young men who excelled in the classroom and on the diamond. Their hard work, along with that of their teammates, produced a great season with many memories,” Athletic Director Chris Vander Woude says. “Their nomination to the All Academic Team demonstrates their pursuit of excellence in the classroom and showcases the true Catholic student-athlete at Christendom.”

The USCAA is a national organization that exists to provide quality athletic competition on a regional and national level.  The USCAA focuses specifically on smaller institutions of higher learning and their student athletes. For more information, visit theuscaa.com.