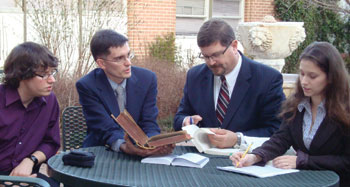 This spring, students of Latin at Christendom’s Graduate School in Alexandria, VA, collaborated with theology professor Dr. RJ Matava on a translation of Francisco Suárez’s Disputation 8, which —until now—had never been translated into English. These metaphysical disputations on truth and falsity were translated as part of an elective Latin course requested by the students.

“The dedication and enthusiasm of these students is truly outstanding,” Matava said. “Seeing there was more to learn after a course in Latin last fall, they requested an intermediate course, and they were back for more.”

After completing their introduction to Latin grammar early this spring, the students—Stephanie Pacheco, Vladimir Rudenko, and Michael French—spent the remaining ten weeks in a reading group where they practiced reading the Latin text aloud, then rendering it into English in a live group setting. The progress of the reading group assisted Matava with a translation of Suárez’s Metaphysical Disputation 8, which he hopes to have drafted with an introduction and notes by next summer.

Francisco Suárez, S.J. (1548-1617) is an important transitional figure in the history of Catholic thought, bridging medieval scholasticism and modernity. His Metaphysical Disputations are one of the most influential works in the history of philosophy.

“As master degree students, being able to translate philosophical texts from Latin allows us to touch directly the Doctors and teachers of the Church and hear their teachings in their own words,” French said.

For Pacheco, learning Latin was “like opening the eyes of my mind in a different way.”

“Human language is designed to communicate the experiences that we all have. It’s a different code for structuring thoughts and expressing ideas, but the ideas and thoughts themselves are universal,” she said.

All students hope to continue their theological studies beyond the master’s level after Christendom. Rudenko considers Latin “essential to the pursuit of serious study in Theology.”

“A renewed Latin literacy among Catholic theologians,” he said, “would likely facilitate a sense of continuity in the Christian tradition.”

Matava said that it was an exciting experience leading the class.

“Besides the translation itself, one of our aims was to discover whether there are any connections between Suárez’s idea of truth and his theory of Divine providence,” he noted.