Success is no stranger to Christendom College graduates. They are well educated with a strong moral formation—exactly what every employer is looking for in an employee.  Armed with a liberal arts degree, their communication and analytical skills are powerful tools in the many career fields that they enter. A recent study, published by Millennial Branding, has revealed that companies have discovered the strength of liberal arts majors and are targeting them almost as much as engineering students. 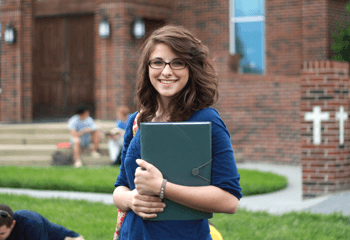 The report states that 30% of companies are recruiting liberal arts majors—a close second to the 34% that are recruiting engineering and computer information systems majors. Finance and accounting majors combined come in last at 18%.

The study also reveals that the skills that employers are looking for most are communication skills (98%), having a positive attitude (97%), and teamwork skills (92%). Christendom alumni have frequently cited these skills, which were honed at Christendom, as the source of their success.

David Hickin, an alumnus from the class of ’90, is a Vice President at KeyBank.  He says that his employers have always wanted someone who can think, analyze, and learn, as well as someone who has the ability to communicate clearly, either verbally or in writing.

“These are the strengths of a liberal arts degree,” he says. “In my experience during the hiring process two consistent themes have always arisen—first, will this candidate be a quick study, adapting to our system, and secondly, will this candidate get along with the rest of the team. As a Christendom graduate I felt well prepared as a result of the demanding course work, while immersed in a campus life based on the principles of Christian living.”

Michele Velasco, an alumna from the class of ’91 and Vice President for Finance at Sirius XM Radio, completely agrees.

“By attending Christendom, I built a strong foundation allowing me to transition easily between various types of executive positions and work environments,” she says.

At Christendom, Michele says she developed what she calls “core skills” that include how to think logically and theoretically, assess ideas, analyze, and communicate effectively.

“When I transitioned from the non-profit world into the commercial satellite industry, my new employer told me directly that I could learn the technical aspects of the industry on the job, but what he wanted was someone who could write well and edit.  With core skills in place, it is easy to learn the particular requirements of a certain position,” she says.

Last fall, the Social Science Research Council reported that recent liberal arts graduates were far more likely to be better off financially than those who are lacking in their abilities to think, reason, and write.

The truth about the often-maligned liberal arts education is that it is exactly where you want to be in this economy—particularly at Christendom College, where they are set to launch a new career development program this fall. The program, “Education for a Lifetime,” will further aid its students in the transition from college to employment by enhancing the students’ learning environment with an integration of their career discernment into their liberal arts education.