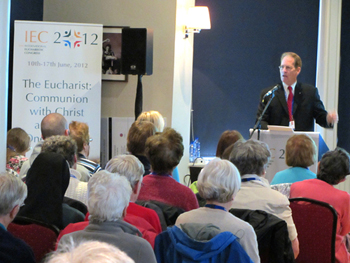 Christendom College President Dr. Timothy O’Donnell delivered three talks at the 50th International Eucharistic Congress held June 10-17 in Dublin, Ireland. O’Donnell spoke to priests and laity alike on the relevance of the Eucharist to the priesthood, the life of Mary, and the Sacred Heart of Jesus. The Eucharistic Congress, which was presided over by Marc Cardinal Ouellet, Prefect of the Congregation for Bishops, attracted over 70,000 people.

“There were people from France, India, the Philippines, South America—from all over,” O’Donnell said. “It truly was international.”

Participants at the Congress heard from theologians, religious, priests, bishops, and cardinals from across the globe on topics relating to the theme of 2012 Congress, “Communion with Christ and with one another.” Even Pope Benedict the XVI addressed the attendees via television broadcast. O’Donnell said that being a part of the congress was an incredible experience were he witnessed “a vibrant living Church.”

“I saw how the Eucharist draws us together,” he said. “I think everyone who participated experienced the Church’s universality and came closer to the Heart of Christ.”

In his first talk entitled “Priests After His Heart,” O’Donnell examined the role of the priest as leaders of the Christian community in the light of Church teaching. He emphasized the importance for priest to conform to Christ in imitation of the sentiments of our Lord’s priestly Heart as found in the Gospels.

“To have a priestly heart is to have the heart of a shepherd—the Heart of Christ,” O’Donnell said in his talk. “Today, especially in this climate of contempt and suspicion, we need to pray for our priests. But in addition to praying for our priests so that they will remain true to their calling, we must also offer prayers of thanksgiving to God for them.”

O’Donnell’s second lecture examined Mary’s unique role as, what Blessed John Paul II called, the “Woman of the Eucharist.” He explained that Mary was constantly devoted to the Body, Blood, Soul, and Divinity of Jesus, which is exactly what the Eucharist is.

“Mary conceives through the Holy Spirit, and at Mass, the Sacrament is confected through the same agent, the Holy Spirit,” he said. “As Mary kneels before the Angel in awe and pronounces her fiat, she becomes at that moment a living tabernacle, holding the Creator of the universe within… So Mary, having received our Lord into her body, ‘goes in haste’ to bring Him to others. It was the first Eucharistic procession.”

O’Donnell’s third lecture discussed the Sacred Heart of Jesus and the Immaculate Heart of Mary, and was based on his highly acclaimed book, The Heart of the Redeemer.

O’Donnell was the first layman to receive both his licentiate and doctoral degrees in Ascetical and Mystical Theology from the Pontifical University of St. Thomas Aquinas (Angelicum) in Rome. He is a Knight Grand Cross in the Knights of the Holy Sepulchre and he is a Consultor to the Pontifical Council for the Family. Additionally, he is the author of Swords Around the Cross: Ireland’s Defense of Faith and Fatherland and has filmed many programs for the Eternal Word Television Network (EWTN) including Glory of the Papacy and Luke: Meek Scribe of Christ.