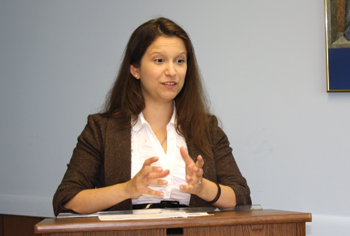 Christendom graduate student Stephanie Pacheco presented a paper at the 2012 Conference of the American Catholic Historical Association (ACHA). Pacheco’s paper was entitled “Monasticism: A Salve for the Ills of Our Society as It Was Once a Salve for Ancient Society” and was presented in the session on “Models of Christian Living.” The ACHA’s annual spring conference was held in New Orleans, La., at Tulane and Loyola Universities.

“It’s a big honor to present,” said Pacheco, who also noted that it is important for graduate students and young professors to show that they are active in their fields and doing worthwhile research through conferences and presentations. Scholarly conferences are a way for graduate students and professors to share their research and get to know fellows working in similar areas.

Pacheco’s paper was based on a term paper for her Church History course, and analyzed the rise of the Benedictine monastic order in the early 6th century amidst the cultural and socioeconomic shifts of the fallen Roman Empire. She described how the monasteries came to replace the towns as centers of trade and culture. Her unique angle on these events was her comparison of the gradual decline of Rome to the gradual philosophical decline of the modern West. Drawing on the work of moral philosopher Alasdair MacIntyre to show the current philosophical and educational chaos, the paper concluded by expressing hope that monasteries, religious life, and the Church in general could again be the means of preserving philosophical coherence and transmitting it to future generations.

“It’s a controversial thing to make value judgments in academia nowadays, but that’s exactly what I wanted the paper to address. What I’ve learned at Christendom has given me the confidence to understand and present the history of the Church as a guide to Her future.”

Pacheco said that while the paper received some healthy criticism, many people seemed to appreciate the perspective taken in the research.

“A senior history professor and priest approached me afterwards to express how excited he was that a young person had such an optimistic view of the religious life,” she said.

Pacheco described presenting a paper at a conference for the first time as “nerve-wracking,” but also that it was a wonderful learning experience as well.

“I met a lot of people and had the opportunity to see what type of projects my colleagues at other universities tackled,” she said. “It was very insightful, and I hope to contribute more to Catholic scholarship in the future.”