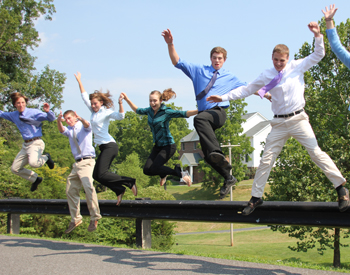 Christendom College attracted the largest number of high school students to its annual Experience Christendom Summer Programs this year, drawing a record number of students from around the country to its scenic campus in the beautiful Shenandoah Valley of Virginia. According to the college’s Admissions Office, the 181 participants represent a 15% increase over last year.

“Not only did we break all prior years’ records, we even ended up with a pretty big waiting list,” says Admissions Director Tom McFadden. “I hated telling people that we were unable to accommodate them, so as a result, we will be adding a session to next summer’s line up, offering five one-week sessions.”

The highlight of the program, which is aimed at students who are going into their senior year of high school, is that many of the participants come into the program with a little trepidation and worry that they will either not enjoy themselves or that they will not fit in, and then, after just a day or two, they end up having the time of their lives.

According to Meg Hopkins, who participated in session three of this year’s program, the week really affected her deeply, and made her think twice about Christendom College.

“Mom, I really don’t want to go. I’m going to have a horrible time, and you know I won’t like it,” she said every day before she left for the program.  She soon discovered that “mother knows best” as she had the best week of her life.

“The girl who told her mom she was going to hate it has completely changed her mind and found a place that she loves,” says Hopkins, a native of New Bern, N.C.

Hopkins says that her mind was changed almost instantly when she arrived at the program.

“There was something about the counselors who had just greeted me and the campus which was to be my home for the next week that helped ease my emotions and warm me up to the idea that yeah, I might actually have fun this week,” she says.

“This happens every year,” says McFadden. “Some students are excited to be here and some are not, but by the end of the program they all say it was one of the best weeks of their lives.”

McFadden says that in a survey of the participants as to their enjoyment of the program, the average rating on a scale of one to five—where five is the best—was 4.78.

“Those numbers really tell a story,” he says. “I think that’s why about 40-50% of the participants ultimately choose Christendom for their undergraduate education.”

McFadden says that the programs surge in popularity can be attributed to its outstanding reputation and its recent 20% discount in price—from $500 to $400.

“Everything really surprised me,” Hopkins says. “Whether it was swing dancing, canoeing, swimming in the river, hiking the beautiful Skyline, or just hanging out in the dorm or the student center—there was not one dull moment. Even the classes were extremely interesting, despite it being the middle of summer, when the last thing on most of our minds was school. I was actually enjoying myself.”

Hopkins says that the most prominent surprise was how easy it was to be Catholic.

“Between daily Mass, Adoration, and praying the Rosary every day, it was extremely easy to practice my faith, while still having fun. And I think this is the most important thing about Christendom. One can have fun, but still be a Catholic,” she says.

Now hoping to attend Christendom for her undergraduate education, Hopkins says that Christendom “caters to every part of a good Catholic life, while showing the world that one does not have to be in the Church praying 24 hours a day to be a devout Catholic.”

To learn more about the Experience Christendom Summer Program and read or watch student testimonies, please visit christendom.edu/experience. Registration for the 2013 program will be available online in December.