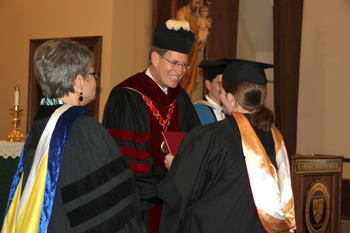 During the ceremony, each graduate received the academic hood, signifying their Masters degree, by Graduate School Dean Dr. Kristin Burns, and then received his or her diploma from College President Dr. Timothy O’Donnell.

Graduate Stephanie Pacheco, who also serves as Administrative Assistant at the Graduate School, gave the valedictory address. She shared her own conversion story as an example of how knowledgeable and faithful Catholics can change hearts and said that she and her fellow graduates must now seek to change hearts.

“We, as well-formed graduates, have the chance and the duty to deliver [Christ’s] message of hope and salvation to all mankind,” Pacheco said during her address. “And through us, and through the whole Church, the Mystical Body of Christ on earth, God communicates His grace and His call today. All our training, studying, and practice benefits us in our life of faith, but it also shores up the Body of Christ.”

Pacheco said that despite much of the misinformation about Catholicism, she and her fellow graduates are armed to fight the good fight, “for the sake of Truth and love of God and neighbor.”

“We are older, younger, local, distant, consecrated, and lay faithful, but we are united by something more important than all of these—a love of Jesus and the Church He founded,” she said.

The graduating class included four consecrated religious, four converts to the Faith, one alumnus of Christendom’s undergraduate program, two ordained deacons, and one man in the Arlington Diocese’s diaconate formation program.  Seven of the graduates attended the residential summer program in Front Royal, Va., earning their degrees over the course of four summers.  Many of the graduates took advantage of the convenience of both classes held at the campus in Alexandria, Va., and online.