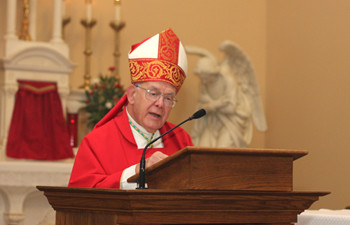 During his homily, Bishop Loverde encouraged students to participate in the Church’s primary mission of evangelization and to make the most of their time at Christendom.

“As your bishop, your shepherd, your father in Christ, I urge you to make the most of this grace filled opportunity to grow—each one—in a deepening faith, in a closer union with the Lord Jesus,” he said. “Then more alive with the joy that comes from believing, with the peace that results from the union with the only one who can heal our hearts—from all that—you and I can go forth and proclaim Jesus by our witness, as well by our words. We can go forth and live out our identity and our mission.”

The Bishop also drew attention to the College’s unique and distinctly Catholic identity that is found in its mission. Quoting Pope Benedict XVI, Bishop Loverde said that Christendom is Catholic, not only because of its mission, but because “it is a place to encounter the living God who in Jesus Christ reveals His transforming love and truth.”

Following the homily, college president Dr. Timothy O’Donnell led the entire faculty in a profession of faith and an oath of fidelity to the Magisterium of the Catholic Church. Christendom remains one of a handful of Catholic colleges in the nation where the entire faculty makes this oath, ensuring that the faith will be taught in its entirety across the various disciplines.

Following Mass, the bishop joined the faculty, staff, and students for a festive brunch. Afterwards, O’Donnell addressed the entire college community informing them of recent campus enhancements and the past year’s success in fundraising and admissions.

According to the college’s admissions office, it was one of the best recruiting years in recent history, beating its goals by almost 18%.

“I think a lot of our hard work over the years is starting to finally pay off,” says admissions director Tom McFadden. “In recent years, we have been focusing on informing potential students about all of the unique aspects of a Christendom College education, making sure they are aware of just how important a Catholic liberal arts education can be in today’s marketplace. It’s refreshing to see so many eager, young men and women come to our campus so that they can become tomorrow’s leaders in society.” 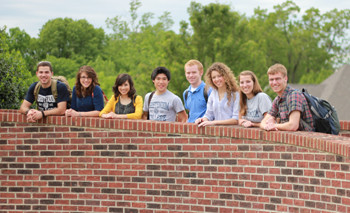 The 105 students in the freshman class come from 33 different U.S. States, as well as from Ireland, England, Canada, and Greece. Fourteen are children of alumni, while 50 are siblings of either current students or alumni. Their average SAT score of 1820 is well-above the national average of 1500.

The beginning of the academic year comes on the heels of a very busy summer, where the college hosted a wide variety of events and activities.

“This was a 15% increase over last year, and we even ended up with a waiting list,” says McFadden. “Because the demand is so high, we are going to add a fifth one-week session next year – and hopefully, we won’t have to turn anyone away!”

The graduate school held its annual six-week summer session and celebrated commencement exercises on August 4, where 17 students received their Master of Arts in Theological Studies.