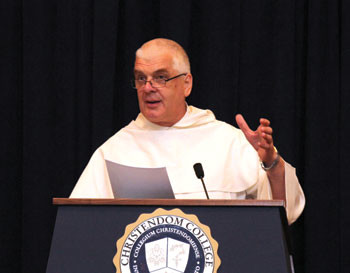 Rev. Wojciech Giertych, the Theologian of the Papal Household, addressed the students and faculty of Christendom College on September 14. Part of the college’s 35th Anniversary Academic Convocation Weekend, Rev. Giertych, who spoke on the Polish historian Feliks Koneczy, received an honorary doctorate—his first ever—during a special ceremony in front of the entire college community.

As the Theologian of the Papal Household, Rev. Giertych serves as a private theological consultant to the Pope. He has the task of providing the Holy Father with advice on theological issues, and checking all papal texts to ensure that ideas are conveyed with clarity, as well as serving as a sounding board for the Pope’s theological ideas. Since the Middle Ages, the post has been held by Dominicans.

“Since [Koneczy] disagreed with the Marxist claim that the class struggle is the motor of history and instead saw the role of morality in history, he was condemned to oblivion in the communist period,” Giertych said.

Rev. Giertych’s address examined Koneczny’s theory of civilizations, which rejected contemporary attempts to view history according to “a deterministic objective process”—attempts which deny spiritual freedom and impose a theoretical vision of reality. Koneczny believed that a view of history “must be based on facts” and that the “finality of actions, consciously formulated by responsible individuals,” can be studied also.

“His laws of history are not a deterministic theory that prophesies the future,” Giertych said. “They grew from an observation of the importance of personal decisions made by individuals who decide to follow or not to follow their moral orientation. It is the social dimension of these ethical stances that generates civilizations.”

One of Koneczny’s “laws of history” noted by Rev. Giertych was that “whenever there is a mix of civilizations, generally it is the lower one that wins.”  Rev. Giertych explained that this law does not refer to economic or political power, but the civilization’s underlying ethos or characteristic spirit.

“Chaos in ethical formation lowers moral standards, leading to the victory of the least morally demanding civilization,” Rev. Giertych said. “Wherever a civilization of a higher moral standard eventually won, the role of religion was decisive. The defense of a higher ethos requires men of character, and not all societies faced with the clash of civilizations are willing to make the effort. Even though honest men may be a statistical minority, it is they who maintain high moral standards within the social order… Koneczny therefore concluded that a higher ethos is always more at risk while a lower ethos wins easily.”

Rev. Giertych noted that Koneczny was not a Romantic who would expect an imminent appearance of the Kingdom of God on earth. Nor was the historian a pessimist fearing a catastrophic decline of the Latin civilization, despite the atrocities he witnessed during the Second World War.

“If anybody can be called a Romantic, this term has to be applied to contemporary ideologies that imagine that simply through globalization, centralization of power, migrations, trade, exchange of capital, or even military occupation flourishing peaceful democracies will come about,” Rev. Giertych said. “Koneczny’s conclusions are realistic, but not pessimistic. They are fully in tune with the Catholic Church’s simultaneous defense of fundamental moral principles in the face of new challenges and with the Church’s offering of the saving power of Christ’s grace.”

Download this insightful lecture at Christendom on iTunes U (christendom.edu/itunesu) or click here for a printable copy of the talk. For more information about Christendom’s 35th anniversary celebrations, including its Gala to be held on April 6, 2013, visit christendom.edu/35.