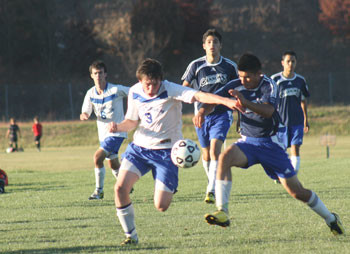 This week, the Christendom College soccer teams continued a winning streak as both the men’s and women’s squads earned impressive victories over rivals Lord Fairfax Community College and Patrick Henry College. In the last four games, the Crusaders teams have allowed only four goals, while outscoring opponents by an incredible 21-goal margin.

On Monday, the men’s team sailed to victory with an 8-1 win over Lord Fairfax Community College. Junior Johnny Foeckler put the Crusaders in the lead within the first few minutes. Seniors Rob Hambleton and Nicholas Blank, along with freshmen Jeremy Minick and Sean Salmon, also pitched in goals of their own in route to the blowout victory.

On the opposite side of the field, Senior Dan Mitchell once again led a dominating defense to a near shutout. The team has been very pleased with their performance on defense.

Compared to the men’s 11-0 victory over Patrick Henry College last week, the Lady Crusaders had a slightly tougher time earning their victory against the in-state rival. The defense went nearly 90 minutes before surrendering a goal, allowing the ladies to hang on to a 2-1 victory.

Like the men, the ladies team scored early behind the efforts of Freshman Maribel Lopez. Then, before the close of the first half, Melanie Clark would chip in another goal. In the second half, the defense led the way to victory, anchored by sophomore Rebekah Koerner, freshman Mary McDuffie, and senior Karen Hambleton. Sophomore Elizabeth Slaten and freshman Sarah Furth gave superb performances in goal and a late corner kick goal by Patrick Henry would not be enough to surmount the Lady Crusaders lead.

On Wednesday, the Lady Crusaders continued their winning ways by defeating local foe, Lord Fairfax Community College by a score of 3-2.

The women are back in action on Saturday as they host Valley Forge Christian College at 1pm. The game will be played at Sherando Park in Stephens City, VA.