Students Excel at Summer Internships on the Hill 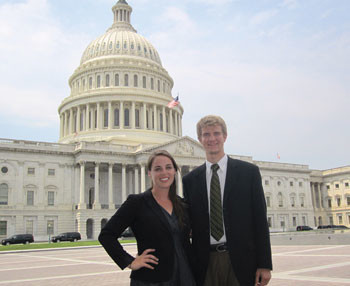 This summer, two Christendom College students found themselves among college students from around the United States on Capitol Hill. As interns in U.S. Congress, seniors Charlie Rollino and Colleen Harmon worked at the center of American government and politics in the U.S. Capitol Building.

Rollino interned in the U.S. Senate for Senator John Barrasso (R-WY), who is the Chairman of the Senate Republican Policy Committee. The Republican Policy Committee is composed of a team of analysts who do research on current issues being addressed by Congress and publish policy papers for the Republican Senators and their staff to aid them in committee and floor proceedings. Rollino’s work consisted primarily in assisting the analysts in their research. He completed research projects in a variety of areas including homeland security, foreign affairs, judiciary, energy, environment, and healthcare. He also attended various committee meetings and wrote summaries for analysts when they were unable to attend.

“During my internship I got to observe what day-to-day congressional affairs really entail, and developed a good sense of the legislative process and what it takes to create policy,”
Rollino says. “I was also fortunate to be able to meet a handful of Congressman and discuss current issues with them.”

Throughout his internship Rollino did a lot of writing when researching and composing meeting briefs.

“I believe the amount of research and writing I have done throughout my studies at Christendom really prepared me well for this aspect of the internship,” he says.

On the opposite side of the dome, senior Colleen Harmon spent the summer working in the House of Representatives as an intern in the office of Congressman Roscoe G. Bartlett (R-MD).
There, Harmon handled constituent mail and telephone calls, wrote press releases and reports, attended committee hearings or caucus meetings to take notes, collected and entered district data, and assisted in event planning and press conferences. She also gave tours of the U.S. Capitol Building to constituents.

“During my summer internship, I was able to enhance my professional skills and participate in the legislative process. Every day was a new learning experience,” Harmon says. “Congressman Bartlett’s staff challenged me to excel in a fast-paced environment and was helpful in making sure that my D.C. experience was an excellent one.”

Harmon found that living and working in D.C. allowed her to see firsthand how public policy is formed and deepened her love for American history. Being exposed to a wide range of issues and opinions allowed her to gain more knowledge of the complex challenges that America faces—especially economically.

“The experience provided me with the opportunity to learn things about myself and the political environment that will help me to decide what I want to pursue after college,” she says. “I know that my formation at Christendom has given me the confidence to succeed. I can say with confidence that my political science classes and my writing classes at Christendom were invaluable to my projects this summer. This real-world experience on Capitol Hill ultimately strengthened my faith and my desire to ‘restore all things in Christ.’”

Rollino, a political science major, and Harmon, an English major, hope that their fellow students at Christendom will apply for internships in the future. Though the process is competitive, they believe that Christendom students have the work ethic and professional skills to succeed in this environment, as well as an immense desire to learn.