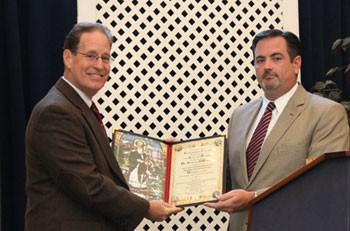 Christendom College President Dr. Timothy O’Donnell celebrates the 20th Anniversary of his installation as president today, October 11. On October 10, the staff, faculty, students, and alumni of Christendom showed their appreciation to O’Donnell for his dedicated leadership with several gifts including a large spiritual bouquet from the entire Christendom community.

I wanted to recall to the College community that today is Dr. O’Donnell twentieth anniversary as President of Christendom College.  Please congratulate him if you see him.  On Sunday, October 11, 1992 Dr. Timothy O’Donnell was formally installed as the third President of Christendom College.  Dr. O’Donnell joined the Christendom faculty in 1985 as an Assistant Professor of Theology and History.  He in turn became an Associate, then full Professor of Theology, and has served as Chairman of the Theology Department, Director of Student Activities, and Vice President of Student Affairs prior to being named President.  In 1992 the Board of Directors of the College asked Dr. O’Donnell to assume the Presidency of the College to follow upon the dedicated service of his two predecessors, Dr. Damian Fedoryka, and the Founding President, Dr. Warren Carroll.

O’Donnell speaks following his installation as president at a ceremony in 1992.

When Dr. O’Donnell took the reins in 1992 the College had an enrollment of 144 students, an operating annual budget of less than 2.5 million dollars, total assets of slightly less than 5 million dollars which included an endowment nearing the half a million mark and building assets of 3 million dollars.  Today the College has 388 students, an operating annual budget over 10 million dollars, total assets over 36 million dollars which includes a 10 million dollar endowment and building assets over 13 million dollars.  While many dedicated people have contributed through their labors to the growth of Christendom College over these twenty years, I think it cannot be denied that Dr. O’Donnell has played the key role in the College’s success through his untiring leadership.  Dr. O’Donnell and his wife Cathy, over these twenty years, have spent countless hours of travel and almost seemingly tireless effort to bring the College to the attention of prospective donors, parents, students, priests, and the Church hierarchy including Pope John Paul II and Benedict XVI.  Many may not remember that Dr. O’Donnell secured the then Cardinal Joseph Ratzinger, Prefect of the Sacred Congregation of the Faith, to serve as the honorary Chairman of the College’s 25th anniversary celebration in 2002.  Dr. O’Donnell has always attributed any success of the College to the annual consecration by the College community each year to the Sacred Heart of Jesus and the Immaculate Heart of Mary.

Dr. O’Donnell celebrates his 20th anniversary as President just as the College celebrates its 35th Anniversary this year as a Catholic institution of higher learning.  Dr. Warren Carroll founded and opened Christendom College with 26 students in 1977 with rented facilities meeting college payroll through novenas.  He founded the College as a conscious response to the call of the Second Vatican Council’s Decree on the Apostolate of the Laity to educate lay men and women for a new millennium.  This was at a time when many long standing Catholic Colleges founded by venerable religious orders were forsaking their Catholic identity and repudiating their Catholic past.  Dr. Carroll wanted Christendom College to be something truly new and yet truly old: “new” in being a Catholic College begun by Catholic laity to educate lay students to bring Christ into the temporal order, “old” in being corporately dedicated to the truth of the Catholic faith and its intellectual, social, and cultural patrimony and hence its name “Christendom!”  Having been recruited by Dr. Carroll to teach at the College in 1985, Dr. O’Donnell, for his part, joined Christendom College precisely because the College was one of the first voices and pioneers in the long journey to restore Catholic higher education after the disastrous Land of Lakes manifesto of 1967.  This declaration ratified and dangerously severed the Catholic university from the life of faith and the Catholic intellectual tradition, which set in motion a decline in the Catholic identity of American institutions of Catholic higher education.

Dr. O’Donnell has told me on several occasions, “Christendom College has been truly blessed, but it seems with each success a new challenge arises—God tests our humility.”  For just as there has begun an encouraging turn around for Catholic higher education in America by the time of the death Pope John Paul II in 2005, and the College itself reached a certain stage of stable growth by the mid 2000s, Dr. O’Donnell, as President, recently has had to navigate the College through a serious national economic recession next only in magnitude to the Great Depression.  He has had also to join his voice more and more frequently with other Catholic leaders to sound the alert on the growing threats to religious liberty for Catholic institutions as most recently exemplified by the new HHS mandate arising from the Affordable Health Care Act—something we did not imagine possible in the early 1990s.

We thank you Dr. O’Donnell for your dedicated and tireless service to the College over these twenty years!