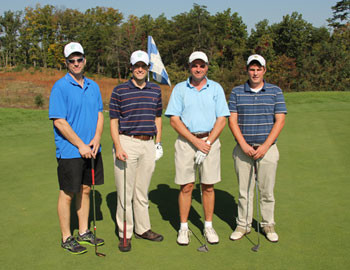 On October 5, Christendom College’s Thomas S. Vander Woude Memorial Golf Tournament was held at Blue Ridge Shadows Golf Course in Front Royal, Va., raising a record $20,000 with 110 golfers and 40 sponsors. Alumni, friends, and supporters of the college came together to assist in the hosting of the tournament, which featured various contests, raffles, and door prizes.

“This year’s tournament was without a doubt a huge success,” College Athletic Director Chris Vander Woude said. “It is hard to beat the weather and the atmosphere, which made it such a great event.”

During the awards banquet following the tournament, the 2012 recipients of the Thomas S. Vander Woude Athlete-Scholar Scholarship were announced–Christendom freshmen Patrick Audino and Jeremy Minick.

“It was great to be able to introduce this year’s scholar-athlete scholarship recipients to their sponsors,” he said. “The support and participation of these sponsors ensure that these scholarships will be around for years to come. Each year I am humbled by all the positive remarks that surround the cause and the golf tournament.”

Former Athletic Director Tom Vander Woude—for whom the scholarship is named—died saving the life of his youngest son on September 8, 2008. He was dedicated to the character development and personal formation of young people, especially in the areas of both intercollegiate and intramural athletics.

Recipients of the scholarship are given the opportunity, as Thomas Vander Woude believed, to be formed mentally, spiritually, and physically. The scholarship is awarded to two incoming freshmen each year, as funds permit. More scholarships hope to be added in the future, and efforts are being made to establish an endowment for the scholarship fund, providing a truly lasting legacy.

“The tournament is a great way to keep the memory of my dad alive and strong—especially the values he believed in—which encompass the philosophy behind the scholarship fund,” Vander Woude said.

Anyone interested in more information about the scholarship or donating to the scholarship fund should contact Athletic Director Chris Vander Woude at athletics@christendom.edu.