Confronted with America’s current economic crisis and the threats to religious freedom and private property, Christendom graduates are feeling the call to defend human dignity and our nation’s founding principles. In recent years, several graduates have pursued that avenue with the Charles Koch Institute in Arlington, VA. 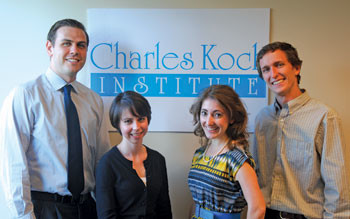 “Working at the Koch Institute was an intellectually stimulating environment where I’d often discuss and debate political philosophy,” Mavretich says. “Thanks to my liberal arts education, I was able to assert that a free society is only a means to an end.  As Catholics, our end goal is to use our individual free will not just to advance our own individual desires, but to glorify God in all that we do.”

After a year at the Institute, Mavretich was offered a job at a non-profit that focused on energy policy. Within a year, he was promoted to Director of Communications.

“Christendom ingrains two skills that are not taught at other schools—the ability to reason and the ability to write,” Mavretich says. “These two skills enabled me to advance in the organization very quickly.”

Wunderlich, who works as a Human Resources Coordinator for CW Financial Services, found that she too was able to succeed at the Institute and beyond thanks to her Christendom education, and believes that it is very easy for people to take America’s unprecedented success for granted.  “I understand the big picture better than if I had not had a liberal arts education,” she says. “The truth is that most of us would not have the opportunity to gain a college education, much less a liberal arts one, without the success and freedom of choice the free market has made possible,” she says.

Norton’s commitment to freedom has inspired him to not only participate in the Institute’s programs, but to work for it as well.

“I gave up a better salary to work at a place where I was challenged to solve society’s problems in creative ways,” he says. “I feel very strongly that the dignity of the human person is most respected in a society that is free. People are able to serve God, themselves, and others by the things they produce or make. Preserving this freedom from secular state control is important.”
Working at the Institute, Norton says that he uses his Christendom education “literally everyday.”  His understanding of human nature, coupled with his ability to think and communicate, has enabled him to work across various fields.

“Someone without a liberal arts degree would find that difficult to do, I think,” Norton says. “I was able to find fulfilling work after going to college, instead of trying to guess what that would be during college.”

Norton says that he works alongside atheists, Jews, Muslims, other Christians, and non-practicing Catholics toward a shared goal.

“For many of them, freedom is the end they are working for,” he says. “For me, God gave us freedom so that we may serve Him in all the things we do or make, buy, or sell. Preserving it from hanging by a noose of secular conceit and morality is how I work to ‘restore all things in Christ.’”