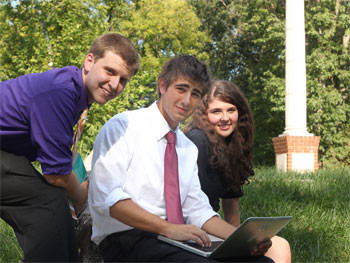 Christendom College is once again included in an exclusive ranking of the top 100 liberal arts colleges in the nation by Kiplinger’s Personal Finance. Kiplinger’s made the announcement earlier this week, including Christendom in the top 50 of its annual list of best values in private institutions, naming the private universities and liberal arts colleges that combine outstanding quality with affordability.

In a Kiplinger’s article set to appear in the December issue on the magazine, Senior Editor Jane Bennett Clark notes:

“In these challenging times, keeping costs down and academic standards high can only be described as God’s work—and at some schools, God is doing a pretty good job… Christendom College (number 45), a Catholic-run institution in Front Royal, Va., charges $29,570, the [second] lowest [price on the list].”

“Christendom remains the best value in the world of faithful Catholic higher education,” says Christendom’s Director of Admissions Tom McFadden. “Thanks to our generous donors we can stay free from Federal funding and still offer a robust financial aid program. We can keep costs down, while at the same time, make sure our top-notch liberal arts education is within reach of every family.”

The annual Kiplinger’s top-100 rankings appear in Kiplinger’s December issue—on newsstands November 8 and can be viewed HERE. The website features a tool that lets readers sort colleges according to the criteria that most interest them as well as answers to the most frequently asked questions about Kiplinger’s annual rankings.