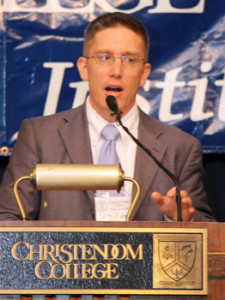 Christendom College philosophy professors Mark Wunsch and Dr. John Cuddeback will be delivering lectures in the Northern Virginia area this month. Sponsored by the Institute of Catholic Culture, Wunsch’s talk is entitled, “Desire: Understanding the Will of Man,” and Cuddeback’s is entitled, “Concepts of Corruption: Plato’s Critique of Government.”

After receiving his B.A. in philosophy from Regis University in Denver, Colo., Wunsch pursued his graduate studies at the Pontifical University of Saint Thomas Aquinas (The Angelicum) in Rome. There he obtained Ph.B, and Ph.L. degrees in philosophy and is now a Ph.D. candidate set to defend his thesis this year. In addition to teaching at Christendom, Wunsch has traveled widely, lecturing on a variety of topics including the relationship between faith and reason, the connection between philosophy and history, and the thought of St. Thomas Aquinas. 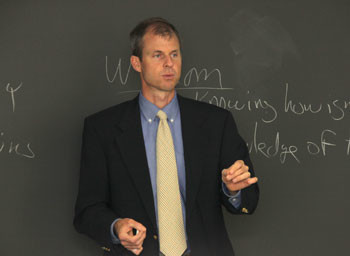 Cuddeback earned his B.A. in philosophy from Christendom College, and received a Ph.D. in Philosophy from The Catholic University of America in 1997. He is a popular writer and lecturer on various topics including virtue, culture, natural law, contemplation, and friendship. His book Friendship: Where Virtue Becomes Happiness was re-published in 2010 by Epic Publishing.