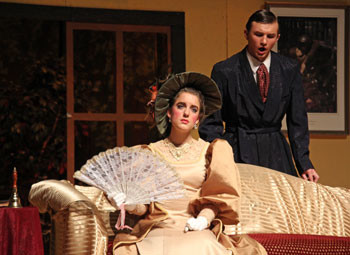 “I was very pleased with the performances and very proud of the dedicated, hard working cast and crew,” the play’s director Dr. Patrick Keats said. “It was an interesting combination of experienced and inexperienced performers—as well as a good representation of all the classes, from freshmen to seniors.”

His thirty-third show at Christendom, Keats noted that Wilde’s witty comedy is a play about family and family relationships, especially the mother-daughter relationship. The players previously performed this play in1992 and set it in the roaring 20’s with dance numbers.

“It is such a good play, we decided to do it again,” Keats said. “This time we wanted to focus exclusively on the play and set it in the period that it was written—1892.”

Bright and detailed costumes captured the 1890’s Victorian London setting as the student cast brought Wilde’s ingenious plot to life. The talented cast included senior Sarah Halbur, freshman Monica Dilworth, sophomore Nick Gossin, sophomore Alex Clark, sophomore Rocina Daez, junior James Ciskanik, and many others.
The Players dedicated their performance to English professor Dr. Robert Rice a longtime supporter of the Players. Since coming to Christendom in 1981, Rice and his wife, Mary-Alice, have never missed a performance and have dedicated themselves, tirelessly and generously throughout the years to the Players’ productions.