“There is no more rare yet predictable event in astronomy than when Venus happens to stray directly between the earth and sun,” Christendom College Astronomy Professor Dr. George Garrigan says. “However, it takes only a few hours for Venus to cross the sun’s orb, so a person must be in the right place and at the right time to witness it.”

In June of this year, the optimum location for witnessing a transit was well above the clouds on an extinct volcano in Mauna Kea, Hawaii. Unsurprisingly, hundreds of professional and amateur astronomers from around the world gathered there for the occasion, including Garrigan.

“It was my privilege to represent Christendom College at this conference,” Garrigan says. 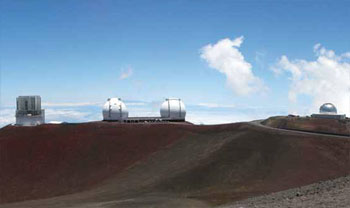 Telescopes: Subaru, the twin Kecks and NASA observatories at the summit of Mauna Kea, Hawaii

Attendees enjoyed a series of professional seminars before being taken to the 13,796 ft. summit of Mauna Kea for private tours of the giant Subaru and Keck telescopes.

“These magnificent machines were specially configured for the occasion to optimize our viewing them and their associated instrumentation,” he says. The Subaru mirror is, at 8.2 meters in diameter, the largest single piece of optical glass in the world. The telescope became operational in December 2000 and recently it imaged a galaxy 12.9 billion light years away—the deepest in space ever penetrated.

He viewed the transit of Venus at the 9,300 foot high Onizuka Visitor Information Station (OVIS). Hundreds gathered there, many with their own telescopes. These were set up next to telescopes provided by the University of Hawaii and a company called “Star Gaze Hawaii.” Garrigan says that there was no end to the friendly discussions and viewing pleasures encountered as he meandered from telescope to telescope while watching the “stately progression of Venus across the sun’s image.”

But why all the fuss?

“The history of observed Venus transits is full of surprises,” Garrigan says. “Seventeen-year old Jeremiah Horrocks was the first person to witness the transit in 1639. His success was only the second time in history that mathematical calculations had produced an exact prediction of an astronomical event—and that is especially noteworthy because it was one of the original paving stones leading eventually to the conviction that math can lead to truth. Isaac Newton would, a half-century later, acknowledge that he had based much of his discoveries on Horrocks’ work.”

Observers assemble and check their telescopes at OVIS prior to the transit.

Garrigan also explains that in 1716, Edmond Halley—of Halley Comet fame—recognized that if two very careful observations of the Venus transit were made from different spots on the earth’s surface at the moment Venus appeared to touch the sun’s edge, it would be possible to use triangulation to determine the precise earth-Venus distance. He also detailed how it would then be possible to calculate not only the distances to the sun and all planets, but also the respective masses of each planet.

“These discoveries in astrophysics, through the transit of Venus, made our entire space program possible,” Garrigan says.

Thanks to the use of RADAR after World War II and modern satellites that have visited—and even landed on—the planet, most mysteries about the planet were solved by 2004.

“I had more humble aspirations,” Garrigan says. “I was excited about seeing something that will not be seen again until December of 2117. There also were other amenities to be enjoyed. Given the variety of solar filters and telescopes, one could move from telescope to telescope and enjoy marvelously different views of the transiting planet, the boiling surface of the sun, prominences, and eruptions around sunspots. The six hours for the event passed quickly.”

Garrigan encountered several “solar cones,” which are used for the ultra-safe viewing of the sun, sunspots, and the transiting Venus.

“I had never seen a solar cone before, but after inspecting one and discussing it with its owner, I found it relatively easy to construct once I returned home. Christendom students will be using it in the future,” he says.