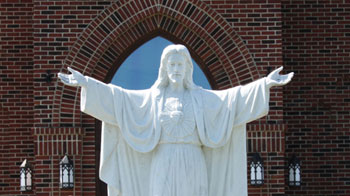 Christendom College has joined 15 Catholic colleges and universities in signing on to a new legal brief in support of lawsuits filed against the Obama administration over its controversial pro-abortion HHS mandate. The brief supports Belmont Abbey College and Wheaton College, institutions that demand immediate exemption from the Administration’s “contraceptive mandate,” which requires religious colleges to insure both employees and students for sterilization and contraception, including drugs that cause abortion.

“Christendom College is proud to stand with Belmont Abbey College and Wheaton College against the imposition of the anti-life agenda of the Federal government,” Christendom’s Chairman of the Board Donna Bethell says. “We and all the other institutions and individuals who are in this fight recognize that our liberties are threatened, indeed they have already been denied by President Obama. This is not an accident, an unwitting error. It is deliberate and indicates that if he gets away with suppressing religious liberty, the first liberty in the First Amendment, he will feel free to attack the rest of the First Amendment and the Bill of Rights.”

The amicus brief was authored and filed in October by attorneys of the Alliance Defending Freedom (ADF), which has worked closely with Catholic and other Christian colleges in defense of their constitutional rights.

“Anyone who cherishes freedom of speech and of the press and the right of assembly and the right to petition the government for redress of grievances, all guaranteed by the First Amendment, must join this fight to protect religious liberty,” Bethell says.

The Cardinal Newman Society helped to organize the signing institutions.

“Belmont Abbey is not alone. Every faithful Catholic college is already suffering the damage caused by this ruinous mandate, which demands that they violate their deeply held Catholic beliefs,” said Bob Laird, Director of Programs for The Cardinal Newman Society. “Additionally, Christian colleges, businesses, and other employers who fear the loss of their religious freedom are similarly affected by the mandate. This amicus brief represents a united front in opposition to the Obama administration’s outrageous violation of religious freedom.”

Belmont Abbey College and Wheaton College are appealing dismissals of their lawsuits by two judges on the U.S. District Court for the District of Columbia. Neither judge ruled on the merits of the cases, but instead denied that the colleges had suffered harm because of the Obama administration’s “safe harbor” provision, which has delayed federal enforcement of the contraceptive mandate for one year.

But that safe harbor is “illusory,” argues the Becket Fund for Religious Liberty in its consolidated appeal filed on October 5. The delay only provides a temporary reprieve from massive fines on the colleges, but the mandate is in effect and already puts the colleges at a disadvantage when trying to hire faculty and other employees, who face the prospect of losing their employer-sponsored health insurance.

In the amicus brief, ADF and the signers explain how the contraceptive mandate “is not the least restrictive means of advancing a compelling governmental interest.” The Religious Freedom Restoration Act allows the federal government to “burden a person’s exercise of religion” only if the action “furthers a compelling government interest” and “is the least restrictive means” of doing so.

Instead, the brief argues, research indicates that mandatory contraceptive coverage will not have a significant impact in reducing unwanted pregnancies, which is the government’s apparent justification for the mandate. Moreover, the Obama administration cannot claim the mandate is “compelling” for most religious employers when already about 100 million Americans are exempted in “grandfathered” plans and at least IRS-recognized churches are also exempt. Finally, there are options for reducing unwanted pregnancy and making contraception widely available that are far less restrictive than forcing religious employers to include it in their insurance plans.