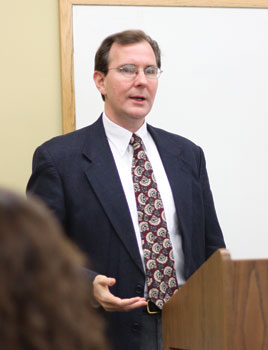 Dr. Christopher Shannon, Associate Professor of History, won a fellowship this year in support of a research project titled “The Salvation of the Nations: Sacred and Secular Narratives of Progress in the Postwar West.” Shannon’s project is one of several funded through a major research initiative, “Religion and Innovation in Human Affairs,” sponsored by The Historical Society, an international scholarly organization based at Boston University. Over the course of the next two years, the fellowship funding will provide Shannon with release from a full teaching load in order to devote more time to the research and writing needed to turn the project into a book-length manuscript.

The title of the project comes from a 1950 book of the same name written by Jean Daniélou, SJ. In that work, Daniélou insisted that the Church’s evangelization of the world seeks not simply the salvation of individual souls, but the transformation of whole cultures and peoples.

“In the early years of the Cold War, Daniélou was particularly concerned about the evangelization of areas that remained barely touched by Christianity, particularly in Asia and Africa,” Shannon says. “At a time when the great powers demanded the Third World choose between two materialisms—the democratic capitalism of the West and the totalitarian communism of the East—Daniélou insisted that Catholicism alone could provide the true salvation of the nations. Doctrinally orthodox, Daniélou was nonetheless open to the transformation of the Church through the encounter with non-Western and non-Christian cultures.”

Shannon explains that by drawing on the historical experience of the Church’s evangelization of the Greco-Roman world and northern, Germanic Europe, Daniélou was confident that the Church could incorporate other cultures into the timeless truths of the faith while producing new forms of Catholicism that could illuminate aspects of universal truth neglected in Western cultural contexts. This change, not the economic modernization promised by West and East alike, constituted true historical progress.

“Daniélou was part of a remarkable generation o f Catholic thinkers to emerge in the first half of the twentieth century,” Shannon says. “Coming of age in the wake of the papal condemnation of Modernism in 1907, these thinkers sought to engage modern notions of historical and cultural change without falling into a facile relativism. As neo-Thomist philosophers and theologians sought to establish proofs for the timeless truth of the Church’s doctrines, thinkers such as Romano Guardini, Henri De Lubac, Christopher Dawson, and Daniélou turned to patristic traditions to address issues of liturgy, spirituality, personhood, and culture. These thinkers provided much of the inspiration for the Church’s engagement with modernity in the Second Vatican Council. Supportive of the Council, these thinkers were nonetheless dismayed by the implementation of the Council documents in the late 1960s and early 1970s.”

Shannon’s project seeks both to recover the work of these thinkers in the context of the broader currents of twentieth-century Western intellectual life and to explain how their ideas came to be distorted, and in many cases simply discarded, in the years following Vatican II.

Much of that explanation lies in the historical context of the 1960s—not simply the revolt against authority on the part of the counterculture, but the triumph of mainstream notions of freedom and autonomy that grew out of the West’s battle with totalitarian communism. As the West upheld democratic capitalism as the last best hope of mankind, Catholic supporters of the West, particularly in America, increasingly felt the need to reshape the Church in the image of secular modernity.

“Despite the catastrophe of this capitulation to culture, authentic voices of Catholic renewal persisted into the late twentieth century,” Shannon says, “I intend to show how thinkers as diverse as Hans Urs von Balthasar, Ivan Illich, Mary Douglas, and Alasdair MacIntyre continued the Catholic engagement with culture and history in order to formulate an authentic Catholic modernity.”

His study will conclude with an examination of the ways in which the pontificates of John Paul II and Benedict XVI have drawn on the insights of earlier thinkers like Guardini and De Lubac to offer a corrective interpretation of Vatican II that speaks not only to the reform of the Church, but indeed, to the salvation of the nations.