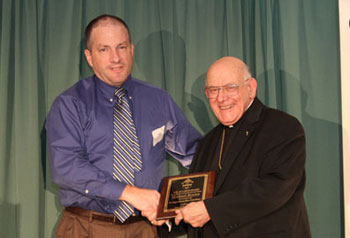 “The Ex Corde Award is given to someone who has demonstrated exemplary service or support to College Campus Ministry, giving their time, their energy, indeed, even a piece of their very own heart, in order to share with university students the love of Christ,” Fr. Nassetta said. “As Dean of Students–a position he held for ten years–Mike began a mission trip program for students which, over the course of fifteen years, raised over $700,000 to enable more than 400 students to spend their spring breaks serving the poorest of the poor in eight foreign countries and in the U.S.  Last year, for example, 65 students went on mission trips–an astonishing 1/5 of the total student body.”

Fr. Nassetta also highlighted Brown’s work as a coach to Christendom’s basketball and volleyball teams as well as frequent student trips to visit the local Missionaries of Charity houses and “Hangout with the Homeless” in downtown D.C.

“Whether in the classroom, on foreign missions, in poor city streets, or in the gym, Mike Brown’s extraordinary humility and charity has lead thousands of students, and others, to experience the love of the Heart of Jesus,” Fr. Nassetta said. “Thank you, Mike, for all you have done for the students at Christendom College.”

The three students to win “Volunteer of the Year” awards were seniors John McFadden, Sara Federico, and Chris Roberts. The awardees work tirelessly each semester as leaders in the college’s student club Shield of Roses, which travels to Washington, D.C., every Saturday morning to peacefully protest abortion at the Planned Parenthood clinic.