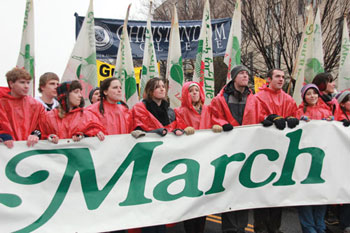 On January 25, the entire student body of Christendom College, as well as members of the faculty and staff, will join the hundreds of thousands of pro-life Americans at the 40th Annual March for Life in Washington, D.C. Christendom has cancelled classes for the day and the Student Activities Council has charted buses to transport over 400 people from its Front Royal, Virginia, campus.

“I find it very refreshing that the college cancels classes every year so that we can attend the March,” says Chris Roberts, a senior and president of the student pro-life club Shield of Roses, which prayerfully protests at the Planned Parenthood in D.C. once a week. “It really highlights Christendom’s dedication to the Church’s teaching on the sanctity of life—even in a culture of death.”

Roberts says that the March is one of the best ways to show solidarity with fellow pro-lifers.

“We are able to reinvigorate ourselves for the fight,” Roberts says. “And it’s great to see our professors and staff and their families take part.”

Every year, Christendom has a very big presence at the March for Life, being one of only a handful of colleges to cancel classes for the event, which marks the anniversary of the Roe v. Wade decision that legalized abortion on demand in the United States. The college’s entire student body enthusiastically attends the March. In 1984, 1998, 2009, and 2012, Christendom students led the March for Life, carrying the lead banner and flags.

The annual march is normally held on January 22 each year, the date commemorating the infamous U.S. Supreme Court decision decriminalizing abortion across all 50 States and enshrining the right to abortion as a Constitutional right. This year’s March for Life has been moved to January 25 due to the upcoming Presidential inauguration events which will be held on January 21.

The college has attended the March for Life as a community every year since the school was founded 35 years ago. Its students are active in pro-life work year round, through Shield of Roses, as well as taking part in sidewalk counseling, volunteering at the local pregnancy center, and other pro-life activities.