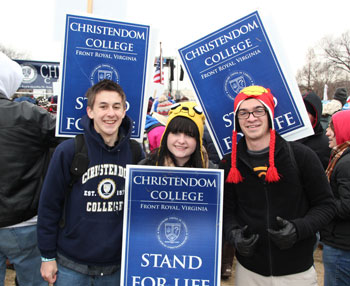 On January 25, Christendom College transported over 400 students, faculty, and staff to the 40th Annual March for Life in Washington, D.C. Despite freezing temperatures, the college community rallied on the Mall facing Capitol Hill with an estimated 500,000 fellow pro-lifers from across the nation.

The students were excited to be apart of the youthful gathering, which protests today’s biggest human rights issue.

“The March is so invigorating because it is a chance to renew our commitment to life with each other and with God,” senior Stephen Wood of California said. “And there is no better way of living out this commitment than by walking in a spirit of prayer and penitence through the streets of our nation’s capital.”

The college traditionally cancels classes for the day of the March so that the entire school can attend, and this year was no exception. The student body started off the day with morning Mass at Christendom’s Christ the King chapel, then piled into buses which traveled to D.C. On the way, everyone prayed a Rosary for the intentions of the pro-life movement and for an end to abortion.

Although many Christendom students are March for Life veterans, they never fail to be amazed and encouraged by rallying alongside so many young people for the same cause.

“Whether it’s your first time to the March or your tenth, it never gets old,” said sophomore Emily Bot of Minnesota, who has attended the March many times. “Being surrounded by thousands of other pro-lifers is an amazing feeling—knowing that we are not alone in the fight—it’s a great experience!”

Sophomore Maria Bonvissuto of Tennessee also enjoyed what she called “the excitement” of taking a stand for the unborn.

“Marching for the unborn serves as a source of rejuvenation and hope,” says Bonvissuto.  “We come to realize each year that through the March, we can make our voices heard as witnesses to the evil of abortion.”

Students returned from the March with a renewed purpose to continue in the pro-life work that they are active in year-round. Some of these pro-life activities include Students for Life, a club that focuses on supporting the pro-life cause through activism, and Shield of Roses, a student group that prays every Saturday morning in front of the Planned Parenthood clinic in D.C. Students also volunteer their time and talent at the crisis pregnancy center in Front Royal.