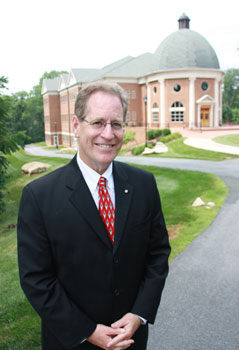 On February 1-2, Christendom College will welcome a number of Catholic college and university presidents to its Front Royal, Va., campus as it hosts the Ex Corde Ecclesiae Presidents’ Roundtable. The Roundtable will examine the challenges and opportunities facing Catholic institutions of higher education, and will give the presidents an opportunity to discuss some very important issues.

“I believe that all the presidents involved will benefit by meeting to meditate on how we can cooperate with each other to be of service to Christ, His Church, and our nation through our educational apostolates,” Christendom College president Dr. Timothy O’Donnell said.

The Presidents Roundtable, which was initiated by O’Donnell, is a private association of presidents of Catholic universities, colleges, and institutes, who have embraced the vision of Catholic higher education as presented in the Apostolic Constitution Ex Corde Ecclesiae of Blessed John Paul II and developed by Pope Benedict XVI, particularly in his historic address at the Catholic University of America on April 17, 2008.

During their meetings, the presidents will informally discuss areas of mutual interest and concern related to the strengthening of Catholic identity and will take advantage of the opportunity for spiritual rejuvenation in the company of fellow presidents. As a special guest, His Eminence Francis Cardinal Arinze—who has fully supported the initiative—will personally lead the Roundtable’s spiritual reflections.  The discussions will cover topics ranging from student life to presidential leadership within the university. All discussions will be in service to the individual mission and unique charism of each institution.

“As a liberal arts college, Christendom has given dynamic leadership to its students on how to discover the true, the good and the beautiful, and how to pursue these goods which are so deserving in themselves,” says Cardinal Arinze. “The students are taught not to be afraid of the truth, of reality. Christendom College is above all a Catholic educational institution. It importantly expresses its Catholic identity through an explicit profession of the Catholic Faith, and through studies given unity and a sense of direction by sound philosophy and authentic Catholic theology. It is joy for me to be associated with whatever has to do with the good of Christendom College.”

The participating presidents will also sign a pledge to uphold the teachings of the Catholic Church concerning Catholic higher education. Cardinal Arinze will then personally present this to Pope Benedict XVI. Nearly 20 presidents will attend the Roundtable discussions and/or sign the pledge.

For more information about the Ex Corde Ecclesiae Presidents Roundtable contact Olivia Ruhl, at oruhl@christendom.edu or 540.636.2900.