Cardinal Arinze to Discuss Year of Faith and the Apostolate 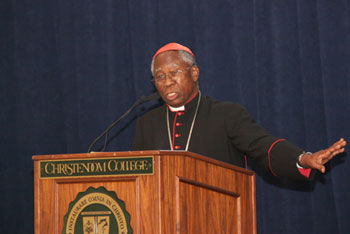 Francis Cardinal Arinze, Prefect Emeritus of the Congregation for Divine Worship and the Discipline of the Sacraments, will deliver a talk entitled, The Year of Faith and the Apostolate of the Laity, to the students and faculty at Christendom College on February 4, 2013, at 6:00 p.m. Part of the college’s Major Speakers Program, the talk will be based upon his forthcoming book that examines role of the laity in transforming the culture.

“This topic is very timely and something dear to us here at Christendom,” College President Dr. Timothy O’Donnell says. “To have the Cardinal here to discuss what is at the heart of our institution’s mission will truly be a highlight of our 35th Anniversary year.”

Arinze will be on campus from January 31 to February 4, celebrating the community Masses and leading spiritual reflections for the Ex Corde Ecclesia Presidents Roundtable, a private association of presidents of Catholic universities, colleges, and institutes, who have embraced the vision of Catholic higher education as presented in the Apostolic Constitution Ex Corde Ecclesiae.

The talk, which is open to the public, will be held in the St. Lawrence Commons and will be followed by a reception.

Christendom College’s Major Speakers Program is an important aspect of the academic life at the College, offering the students and community an opportunity for cultural, intellectual, and spiritual enrichment beyond the classroom. The program offers students the opportunity to gain greater insights and depth of understanding of important issues, and to interact personally with a wide-range of men and women who are shapers and critics of our society.

About Cardinal Arinze
Cardinal Arinze was ordained a priest in 1958 and was consecrated bishop in 1965. In 1979 his brother bishops elected him president of the Catholic Bishops’ Conference of Nigeria, a position he held until 1984, when Pope John Paul II asked him to serve as president for the Secretariat for Non-Christians (now the Pontifical Council for Interreligious Dialogue). One year later, he was appointed Cardinal by Pope John Paul and, in 1999, he received a gold medallion from the International Council of Christians and Jews for his “outstanding achievements in inter-faith relations”. From 2002-2008, he served as Prefect of the Congregation for Divine Worship and the Discipline of the Sacraments. Cardinal Arinze remains active as a highly sought speaker and catechizer, being featured in programs and events that cover Pope John Paul II’s encyclicals and apostolic letters, Vatican II, and many other topics. He is also the author of several books and has been frequent guest on Christendom’s campus.