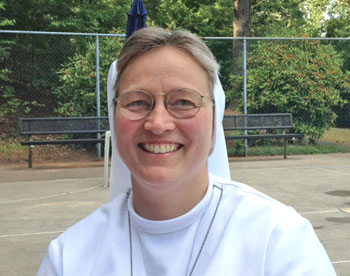 Two Christendom alumni celebrated their 25th Jubilees of final vows this past year. Both graduates of the class of 1982, Fr. Peter Williams and Sr. Eileen Tickner discovered their religious vocations while at Christendom.

While no one ever suggested to Eileen Tickner that she become a religious sister while she attended Christendom, “the call to religious life was taught and caught” in all aspects of the College, she says.

“It was around the dining room table with our teachers. It was relaxing in the Common Room—at our parties—in our discussions that saved the world—in the classes that challenged us to ponder. It was at prayer in the Chapel,” she says.

When asked to pinpoint the moment when she first heard the call of the Lord, she responded, “It would have to be in Mr. O’Herron’s Doctrine classes. How could I hear that the God of all Creation became man to show His love for all humanity and not respond? For me, that was the clincher. I knew I had to follow no matter what.”

Shortly after receiving her degree from Christendom, Tickner entered her novitiate and took her final vows as a Salesian Sister of St. John Bosco in August of 1987. Since that time, she has devoted herself to a joyful mission and vocation to youth, teaching at eight different schools, running retreats for young people in parishes, always sharing her joy and enthusiasm for the Faith with thousands of children aged 3-18.

Fr. Peter Williams is one of 15 siblings, many of whom attended Christendom. After graduating with a BA in Political Science in 1982, he entered the seminary for the diocese of
Burlington, VT, and was ordained in February 1987.

Fr. Williams spent his first five years as Associate Pastor at St. Mark’s parish, where he began a special ministry to the deaf, and as chaplain at the University of Vermont. He now serves as pastor of St. Mary’s parish in Burlington.

When asked about his vocation, he says that he had briefly considered the priesthood as a teenager and a chance encounter with College founder Dr. Warren Carroll convinced him to attend Christendom.

“It was one of the best decisions I ever made,” he says. “Christendom prepared me well for the seminary—especially in the area of basic catechism. Many other seminarians did not have this strong background.”

Those who remember Sr. Eileen and Fr. Williams from their Christendom days recall a striking similarity between them: their engaging wit and sense of humor. Both, along with the 119 other priest and religious alumni of Christendom, continue to share the joy of being a Catholic with the thousands of lives they touch in their ministries.