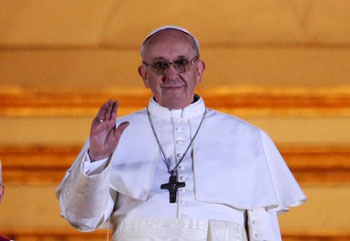 College President Dr. Timothy O’Donnell was in Rome for the papal conclave and election providing voiceover coverage for Vatican TV and Radio as well as appearing as a guest on EWTN’s live programing from Rome.

“We are overjoyed at the election of Jorge Cardinal Bergoglio as the 266th pope of the Catholic Church,” O’Donnell said upon the news of the election. “It was an unforgettable experience to be in St. Peter’s Square and to be with him and to pray with him and for him in a moment of silence amidst hundreds of thousands of people. His humility and deep prayer life will surely enable him to bear the great responsibility of the office. We pledge our loyalty to him and unite ourselves to him in prayer for a pontificate filled with abundant blessings.”

Students participating in Christendom’s Junior Semester in Rome were also there for the election, cheering loudly and welcoming the new pope in St. Peter’s Square. The students have engaged both secular and religious media during the conclave, giving the face of the Church a young and faithful face. College alumni have also been involved in coverage of the conclave and papal election.  Ensuring accurate coverage of these events, alumnus Christopher Wells (’97) is working for Vatican Radio, alumna Ann Schneible (’04) is working for Zenit News Agency, and Stephano Flori (’87) is working with EWTN’s TV production team in Rome.

Studetns, faculty, and staff welcome the new pope via EWTN in the John Paul the Great Student Center.

On the Front Royal campus, college chaplains Fr. Donald Planty and Fr. Mark Byrne each celebrated a Mass for the Election of a Pope on March 11. Two Masses for Pope Francis will be celebrated on March 14 and another on March 15.

The college has always boasted deep affection for, not only the office, but also the person of the Holy Father—past and present. The entire Christendom community offers prayers of thanksgiving and for the intentions of Pope Francis as he leads the Church further in the new evangelization of the 21st century.