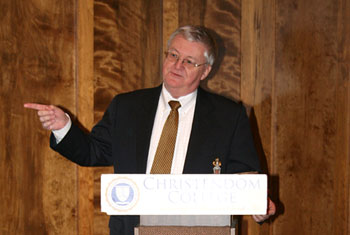 Dr. Harry Veryser, author and professor of economics at the University of Detroit Mercy, delivered a lecture at Christendom College entitled “Thomism and Austrian Economics” on March 18. Sponsored by the Intercollegiate Studies Institute and part of the college’s Faith and Reason Lecture Series, Veryser discussed how the foundational principles of the Austrian school of economics capture St. Thomas Aquinas’s understanding of the nature of man.

Veryser discussed in particular the thought of economists Friedrich Hayek and Ludwig von Mises, and pointed out that despite their varied anthropological starting points—or understanding of human nature—they come the same conclusion as St. Thomas.

“When you get two people coming from different view points that come to the same conclusion, you have to pay attention to their conclusions,” he said.

Delving into the economic issues facing the world today, he explored the root cause of why the world economy has fallen to a state of such instability.  While offering certain solutions for the problems of today’s economy, he presented the Austrian economic system, which was founded over a hundred years ago, as an example of a good economy.

“Austrians start with individual human action. They think the primary actor is the individual person, not the gross national product.”  Veryser said. “They agree with the St. Thomas on private property and on subsidiarity.”

Veryser criticized the modern understanding of economics, which primarily focuses on mathematical formulas as opposed to a proper anthropology of man.  Because of the fact that modern economists view life through a purely materialistic point of view, and try to predict the irregularity of human action through an ordered, mathematical system, the economic order of society has collapsed. He explained that the Austrians view man as individuals, and treat each one like a unique asset, rather than generalizing human behavior.  Veryser posited that this understanding of man is the reason they have had economic success for the last hundred years.

You can download this fascinating lecture at Christendom on iTunes U, christendom.edu/itunesu.

About Dr. Harry Veryser
Dr, Veryser graduated from the University of Detroit, where he received his undergraduate degree in Philosophy and Economics and two Master of Arts degrees in Economics and Religious Studies.  He is the author of the book Our Economic Crisis: Sources and Solutions, as well as numerous other articles that have been published in such magazines as The Detroit News, and Intercollegiate Review.