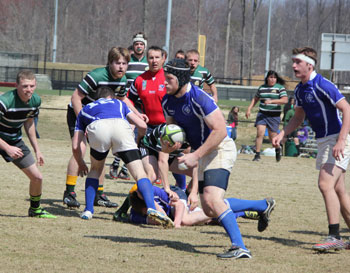 The Christendom College Crusaders rugby team is now 3-0 after their win over George Mason on Saturday. George Mason, who at one time played Division I rugby, played hard but in the end, came up short, losing to the Crusaders 29-17.

Earlier in the season, the Crusaders defeated American University 54-5 and Hampden-Sydney College 52-0, prior to beating George Mason for the third year in a row.

These recent defeats are of a “David vs Goliath” nature in that the three colleges the Crusaders defeated are quite large, compared to Christendom’s 400 person student body: American University has an undergraduate enrollment of over 6500, Hampden-Sydney has 1100 male students, and George Mason has over 20,000.

The Crusaders next take on Loyola University in Maryland (enrollment of over 3800 undergrads) on April 13, and then Lord Fairfax Community College on April 20.