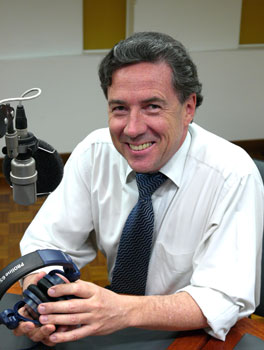 Sean Patrick Lovett, Vatican Radio’s director of English language programming, will deliver a talk entitled “Evangelization in the Year of Faith” to the students and faculty of Christendom College on April 15. Part of the college’s Major Speaker’s Program, the talk is open to the public and will be held in the St. Lawrence Commons at 6 p.m.

In addition to his duties at Vatican Radio, Lovett is a professor of Communications at the Pontifical Gregorian University. A native of South Africa, he describes himself as Irish by blood, African by birth, and Italian by adoption. Lovett received his education at the University of Cape Town, South Africa, and the National Academy in Rome. He has a Doctorate in Communications “Honoris Causa” from the American University of Rome.

He began working at Vatican Radio under Pope Paul VI in 1977 and later served as a war correspondent in the 1980s in Lebanon, South Africa and Northern Ireland. He followed Pope John Paul II on many of his international pilgrimages for 26 years as a Vatican reporter. In addition to his appointment at Pontifical Gregorian University, Lovett is vice president of the Centre de Recherché en Communication, in Lyon, France, coordinating media and communications workshops in Africa. He worked with Mother Teresa to write The Best Gift is Love, a bestselling book of Mother Teresa’s meditations. He has done voice-overs for dozens of films, cartoons, and documentaries.