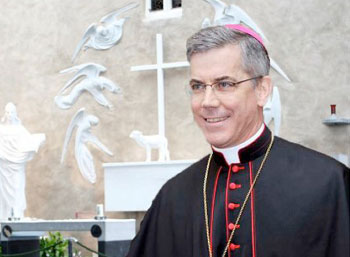 Christendom College is pleased to announce that Archbishop Charles Brown and Mrs. Anne Carroll will join the 96 members of the Class of 2013 for commencement exercises over the weekend of May 10-12, 2013.

Archbishop Brown will offer the Baccalaureate Mass on Friday, May 10, and will deliver the commencement address and be awarded an honorary doctorate from college President Dr. Timothy O’Donnell at the commencement exercises on Saturday, May 11.

Archbishop Brown is the Papal Nuncio to Ireland. Appointed nuncio by Pope Benedict XVI on November 26, 2011, he had previously served as an official at the Congregation for the Doctrine of the Faith (CDF). He was ordained a priest in 1989 in St. Patrick’s Cathedral, New York, and served the Archdiocese as a parochial vicar until 1994, when he went to work for the CDF, which was headed by the then-Cardinal Joseph Ratzinger.

On Saturday, May 11, Mrs. Anne Carroll, the founder of Seton School in Manassas, Va., and Seton Home Study School, will be awarded with Christendom College’s St. Catherine of Siena Award for Distinguished Service to the Church & Christendom College.

Carroll is the current director of Seton School in Manassas and is the widow of the late Dr. Warren H. Carroll, noted Catholic historian and founder of Christendom College. She has spent the past thirty-five years developing and teaching an authentically Catholic curriculum at the junior and senior high school levels and is the author of Christ the King: Lord of History and Christ and the Americas.

The 96 graduates of the Class of 2013 include students from Ireland, Canada, and the U.S. Additionally, 42 of the graduates are siblings of Christendom alumni, while seven are children of alumni.

The graduates scheduled to receive B.A. degrees include:

Two Associate of Arts will be conferred on Grace Gniewek and Daniel Traina.