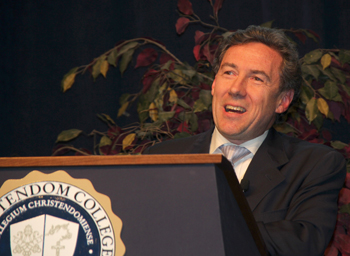 As part of Christendom College’s Major Speakers Program, Sean Patrick Lovett, Vatican Radio’s director of English language programming, delivered a deeply insightful talk on April 15 about some of his many intriguing life experiences working so closely with Pope Francis and his four predecessors over the past 35 years.

Lovett, a native of South Africa, has had his finger on the pulse of the Vatican since arriving in Rome 35 years ago and taking a position with Vatican Radio as a reporter. He has covered many Vatican-related events with Pope Paul VI, Pope John Paul I, Pope John Paul II, Pope Benedict XVI, and Pope Francis, and has traveled with a number of the Holy Fathers on their pilgrimages across the world.

In his talk, Lovett explained that each of the past pontiffs has added something very important to the role of Vicar of Christ, and taught him something unique.

Pope Paul VI showed the “dignity of the papacy,” he said. As Holy Father, Pope Paul VI embraced the idea of Vatican Radio, and like his namesake of St. Paul, he wanted to do all that he could to be like the Apostle to the Gentiles, the Great Communicator.

“Pope Paul VI was the first Pope to fly on an airplane, the first Pope to visit Africa, Australia, the Middle East, North and South America.  Pope Paul VI brought his radio with him on his travels and used it constantly to broadcast messages of comfort, consolation, and encouragement to anyone who would listen,” recalled Lovett.

Pope John Paul I, according to Lovett, showed the “humanity” of the position of Pope. Even in the mere 33 days of his pontificate, Pope John Paul I brought the papacy to the people, and enabled the faithful to connect on a more human level with the Vicar of Christ. He would refer to the faithful as “brothers and sisters” rather than “sons and daughters,” and encourage the little children to come to him at his audiences. This was a huge departure from what previous pontiffs had done.

According to Lovett, Pope Benedict XVI taught him to listen, to really listen to what the Holy Father was saying and to meditate on it.

Finally, when asked what the greatest thing any Pope had ever said to him was, Lovett related that it was something that the new Holy Father, Pope Francis, had said to him on Easter.

Lovett had been working with Vatican Radio to broadcast the Pope’s Easter Mass and message to the world, and once that was finished, everyone began packing up their gear and getting ready to depart. Since Lovett had not had the opportunity to meet Pope Francis yet, he took that opportunity to be introduced to the Holy Father who immediately said to him, in English, “Have you had lunch yet?”

According to many reports, the Holy Father is not all that well versed in English, so Lovett was surprised to hear Pope Francis ask him about such a seemingly small detail as lunch, in English no less. Then the Holy Father told him to go home and have lunch and to have a blessed Easter, again, all in English.

Other aspects of his talk focused on the concept of listening and the value of listening in the New Evangelization.

Prior to the talk, Christendom College President, Dr. Timothy O’Donnell, presented Lovett with the St. Thomas More Medallion for Defense of the Faith and Holy Mother Church. Lovett was the first recipient of this new award.

This talk will be available on Christendom’s iTunes site in the near future.