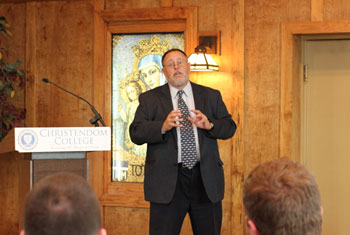 Dr. Ken Grasso, a professor of political science at Texas State University, delivered a lecture entitled “The Freedom of the Church and the Taming of the State” to the students and faculty of Christendom College on April 29. Speaking as part of the college’s Faith & Reason Lecture Series, Grasso examined the role of Christianity in the development and the future of modern democracy.

Grasso explained that a new and revolutionary view of man and society came with the advent of Christianity. It brought an understanding that changed western political life in fundamental ways and which laid the ground for the western tradition of liberty.

Grasso also noted that the history of the past several centuries suggests that liberal modernity’s effort to carry forward the quest for freedom—set in motion by Christianity—on a new and entirely secular basis is in deep trouble.  The erosion of morals, virtues, and religious institutions is resulting in a decrease in liberty and an increase in the size of the state.

“Religious institutions have a particularly important role as the bearers and mediators of the meaning of human existence,” Grasso said. “They are uniquely equipped to challenge the moral authority of government, to relativize its claims, to insist on an accountability to a standard not of its own making, to resist its efforts to absorb all human life in the polis, and to remind it that man’s horizons transcend the world of space and time.”

Grasso said the religious institutions have “an indispensable role” in securing freedom and that is why totalitarian regimes have an unrelenting hostility of toward them. Religious institutions, and in particular Christianity, brings with it an understanding of the dignity of the human person that protects liberty and reveals human life to be more than an economic or civic commodity.

“On the one hand, Christianity played an absolutely essential role in the rise of Western liberty,” Grasso said in conclusion. “And on the other hand, there are serious reasons to worry about the long term sustainability of the political revolution set in motion by Christianity and our increasingly secularized, post-Christian, post-metaphysical, cultural environment.”

You can download this fascinating lecture at Christendom on iTunes U.

About Dr. Grasso
Dr. Grasso received his M.A. and Ph.D. from Fordham University, and his B.A. in Government and Politics from St. John’s University. He teaches a number of undergraduate and graduate level classes. He has been honored with awards such as an Award for Outstanding Teaching by Pi Sigma Alpha in 2005, the Foundation in Excellence Award by the Texas State Student Foundation and a favorite professor award by Alpha Chi in 1996 and 1998. Grasso has participated in a variety of forums and conferences, such as the Society of Catholic Social Scientists and the Project on American Constitutionalism, among many others. His areas of interest are religion identity and politics, the Constitution, and faith and government.