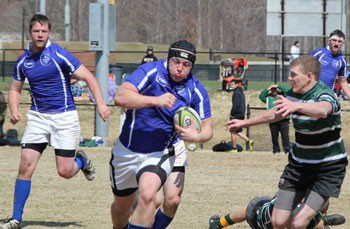 Christendom College’s rugby team completed a memorable and perfect 2013 season with a tough 28-14 victory over the Lions of Lord Fairfax on April 13. Due to the long winter and the spacing of the spring semester breaks, the Crusaders hadn’t seen action since their impressive win over George Mason University in late March. Standing with a 3-0 record for the year, the team put their undefeated season on the line in that last game of the season.

Despite numerous injuries and the Lions having a clear size advantage, the Crusaders remained undaunted. Freshman Rob McKay got the ball rolling as he rumbled through would-be tacklers to score the first try of the game. Not enough can be said for the forwards of the Crusaders who, despite being outsized by close to 50 lbs. in some positions, stemmed the tide and didn’t allow the Lions to gain any interior momentum. Senior Peter Spiering, junior Conor O’Donnell, junior Ben Scrivener, senior Dean Dewey, sophomore Hal Kokes, sophomore Bobby Crnkovich, and McKay stood strong the entire game, bending sometimes but at no point breaking. Dewey put in a stellar performance during his last game in a Christendom jersey, dragging tacklers for long gains and powering his way into the try-zone for the second Crusader try.

The second half saw the tide of momentum turn a bit as the Lions began to impose their size and will on the Crusaders and scored their first try. Crnkovich responded by breaking through the Lion’s defense for another try to add a little bit of breathing room and grow the lead to 21-7. Lord Fairfax would push back again and got the ball outside to their winger who cut the lead to 7 with just 8 minutes to play. Despite having only one sub, the Crusaders managed to push back and the determined ruggers of Christendom would not let them score again.

“One of the main reasons for our success on Saturday was the relentless goal line defense. There were two or three times we were able to keep them out of the try-zone, despite them being within a few yards. Our defense definitely came to play,” said Scrivener.

The final eight minutes of the game was the epitome of the entire season for the Crusaders.

Despite being tired, injured and out-sized, the team bonded together as they had done all season, and as a unit put the nail in the coffin. After the Crusaders had taken possession of the ball senior Tommy Salmon passed to freshman Pat Audino who, despite suffering from an ankle injury, made two beautiful cuts before tossing a pass to fellow freshman Sean Salmon just before Audino was tackled. Salmon then broke a couple of tackles and sprinted into the try-zone for a score. He then scored the point after, putting the score at 28-14, and the final whistle sounded, ending the game and a perfect season for the Crusaders.

“It was a very strong win and our closest game yet, but the guys toughed it out, despite injuries, to finish an undefeated season,” said first year and undefeated head coach Theo Smith.

With this victory the team completed the first undefeated season in Christendom sports history. For more information about the athletics program at Christendom visit christendom.edu/athletics.