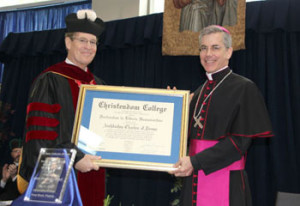 Christendom College celebrated its commencement weekend on May 10-12 by awarding degrees to the 96 graduates, as well as honoring Archbishop Charles Brown, Papal Nuncio to Ireland, and Mrs. Anne Carroll, founder of Seton School in Manassas, Va., and Seton Home Study School. Archbishop Brown celebrated the Baccalaureate Mass on Friday, May 10, and received an honorary doctorate before delivering the commencement address on Saturday, May 11. Mrs. Carroll, the wife Christendom’s founder Dr. Warren Carroll, was awarded the college’s St. Catherine of Siena Award for Distinguished Service to the Church & Christendom College.

“One of the truly beautiful and remarkable strengths of Christendom College is how the plurality of vocations has historically been so well represented by your graduating classes,” the archbishop said during his homily on Friday. “Christendom graduates have followed the Lord and lived lives of holiness as priests, religious, sisters, monks, and brothers, and as holy married people. The extraordinary richness of this variety of vocations from Christendom is an eloquent proof of the deeply Catholic and truly Catholic character of this college. And of that, all of you—especially the class of 2013—can be justifiably very proud.” 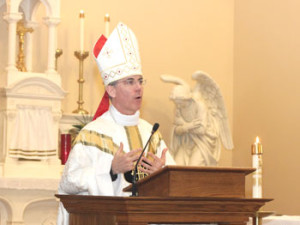 In his commencement address, Archbishop Brown warned students that they are entering “a world which more than ever is drifting aimlessly on a sea of relativism, while at the same time being convulsed with spasms of anger directed at traditional moral values.”  He suggested that proclaiming that truth does exist is the solution to many of the problems in this world.

“Indeed it even seems redundant for us to even mention this to you to today,” he said. “Because the greatness and lasting value of your education at Christendom has been premised precisely on this fact—that there is such a thing as truth. And that truth and the search for truth is worth everything.”

Concluding the archbishop urged graduates to always seek the truth and witness to it in their lives.

“Your years at Christendom have given you an unparalleled preparation for living your faith in our contemporary world,” he said. “By loving the truth and living the truth, you will have an effect on everyone you come in contact with—an effect that is accomplished simply by living and not necessarily always by preaching.” 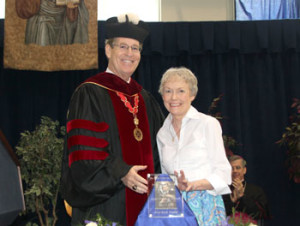 Following the reception of the St. Catherine of Siena Award, Mrs. Carroll gave brief remarks in which she recalled the watchwords of Christendom College coined by her late husband, “Truth exists. The Incarnation happened.”

Mrs. Carroll said that the belief in these words are the legacy of Dr. Warren Carroll and that all the Christendom College alumni who base their lives on those words are paying tribute to Dr. Carroll.

“But far more importantly [Christendom alumni] are placing Jesus Christ at the center of their lives,” she said. “Because He is the Truth and He is God Incarnate. And whenever, wherever our alumni are, whatever they do, they are helping to bring about the new springtime in the Church—to build the civilization of love.” 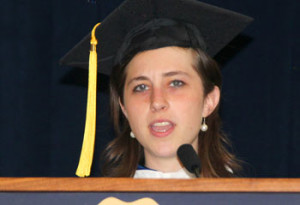 Saturday’s ceremonies began with a bagpipe-led procession from Christ the King Chapel to St. Louis the Crusader Gymnasium. Salutatorian Nicole Koopman of Topeka, Kan., welcomed all the attendees and, in her address, noted the great change that has happened in the world and in the graduates themselves since they came to Christendom as freshmen. She highlighted the many opportunities the students have had to guide student organizations on campus and to share their faith off campus.

“Our class has indeed shone in various leadership roles— and I enjoin my classmates to continue to follow the example of our former pope, Benedict XVI, who leads the Church through his profound humility,” Koopman said. “While Christendom does indeed prepare its students for pursuing intellectual studies, it certainly has supplied us with the tools to flourish in whatever occupation we choose to pursue after college. Just as a warrior undergoes vigorous training before battle, so too does Christendom provide valuable training before entering the fray.” 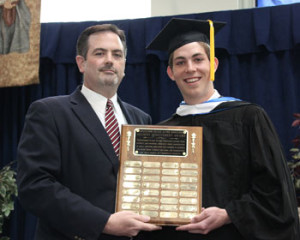 Director of Admissions and Alumni Relations Tom McFadden presented the Student Achievement Award to Nicholas Blank of Woodbridge, Va., for his dedication to the community. Blank made great contributions to the student life of the college and was active in varsity sports, clubs, and many other facets of student life.

Following the presentation of awards to Mrs. Carroll and Archbishop Brown, Valedictorian Sarah Halbur of Joliet, Ill., delivered her address. Halbur said that, for her and her fellow graduates, their time at Christendom was not only a time of intellectual and academic growth, but also a time to learn how to love more deeply. 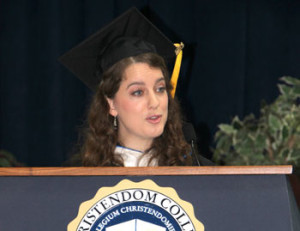 Halbur also paid tribute to history professor Dr. Brendan McGuire, who recently won a battle against cancer and had stood on the stage as Christendom’s valedictorian 10 years ago.

“I know that I speak for the entire class of 2013 when I say that you are a blessing and an inspiration and we are incredible grateful that you are with us here today,” she said.

Closing the ceremony, college President Dr. Timothy O’Donnell delivered his charge to the graduates. He told them that at Christendom they have encountered what G.K. Chesterton called “the romance of orthodoxy.”

“Through faith and reason in your studies here, you have united yourself more deeply to Christ. I have seen that—especially of those of you who have lived in Rome. You know that you are part of a vast, yet a very intimate supernatural family that—despite the portrayal in the press—is young, is vibrant, and is alive.”

O’Donnell charged the graduates to not be afraid in proclaiming the Gospel with clarity and with boldness and to have the courage to swim against the tide.

“Here at Christendom you have only started the journey,” O’Donnell concluded. “It’s the beginning of consecrating your intellect and will to Christ, which will take an entire lifetime to complete.”

Two Associate of Arts were conferred on Grace Gniewek and Daniel Traina.

All addresses and remarks from Commencement Weekend can be downloaded for free at Christendom on iTunes U, christendom.edu/itunes, or watched on YouTube.