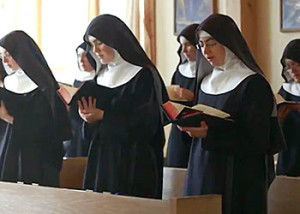 Christendom College alumna Sister Miriam Esther (Lorraine Podlinsek, ’05) appears in an interview in the Cardinal Newman Society’s Catholic Education Daily. In the interview, Sr. Miriam discusses the chart-topping classical albums performed by her and her order, the Benedictine Sisters of Mary, as well as the impact Christendom had on her vocation.

The Benedictine’s albums, “Advent at Ephesus” and “Angels and Saints At Ephesus,” have both raced to the #1 spot in the Billboard Classical Musical Chart. When speaking about her order’s musical success Sister Miriam says that she is surprised that they have had success in the commercial music industry.

“But, then again, there is a natural hunger in the human person for beauty, truth and goodness,” she says, “In traditional philosophy, those are known as transcendentals. It’s a complicated term, but we can see here on a very basic level how they can transcend cultural boundaries to stir the heart and captivate the mind.”

Sister Miriam looks to her Christendom education as formative years where she discovered her love of singing the divine office.

“My freshman year, the girls in my wing decided to pray Morning Prayer together and I also began to attend Compline chanted in Latin by some students in the chapel,” she says. “The Psalms really took hold of me, especially when set to the beautiful Gregorian melodies. I think it was very important in my call to a Benedictine vocation.”