Christendom College’s wildly popular and highly ranked Experience Christendom Summer Programs have been filled this year, welcoming a record 216 students to take part in the 5 one-week sessions. The program, now in its 15th year, has changed the lives of over 1500 students by giving them the opportunity to see what life is like as a student at Christendom College. 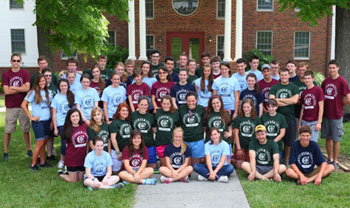 Students from the second session.

“We added a fifth session this year because we ended up with a long waiting list last year, when we only offered four sessions,” Admissions Director Tom McFadden says. “The reputation that our program has of being the most well-attended, highly ranked, and affordable program of its kind in the nation is going to have people registering earlier and earlier each year, in order to solidify a spot for their rising high school senior.”

McFadden says that even though they have once again begun a waiting list this year, they will probably not add a sixth session next year, but rather, limit attendance to those who will be high school seniors in the fall of 2014

The second session ends this weekend and the program’s staff is anticipating the same great reviews that they received from the first session. Participants from the first session were asked to rate the statement, “I enjoyed my summer program experience,” and the overall response was an amazing 4.7 out of 5.

Almost half of those who are attending these programs this summer are doing so at a reduced rate, thanks to the generosity of a number of Christendom’s committed and generous donors who send in money to be used as scholarships and financial aid for the program.

Find out more about the program at christendom.edu/experience.