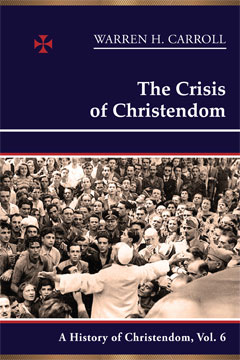 This month, Christendom Press released the final volume in Dr. Warren Carroll’s A History of Christendom series. The sixth in the series, The Crisis of Christendom is concerned with the “crises” which plagued humanity during the modern era. The book by Christendom College’s late founder was brought to completion posthumously with the help of his wife and fellow historian, Anne Carroll.

The book discusses in detail Nazi and Japanese militarism and its crisis in World War II, the inhuman system of Communism and its fall in 1989, and the origins and consequences of the denial of human dignity in the modern culture of death. Carroll shows the power of evil in the twentieth century, but focuses also on the great popes, in particular Pope John Paul II, and the great apparitions of the Marian Century. He ends with a call to hope and action.

As did earlier volumes in this sweeping series, The Crisis of Christendom reflects an unabashedly Christian and Catholic view of history, taking as one of its major themes the centrality of the Papacy to the destiny of the West. Carroll holds that God and individual men and women, not impersonal social and economic “forces,” make history. The characters and actions of these history-makers, both good and evil, are vividly depicted as essential elements in the triumphs and tragedies of Christian civilization in Europe and the New World for two centuries (1815–2010).

Both a gripping, dramatic narrative and an indispensable work of reference for Christian history, this volume, and the entire series of which it is a part, belong in the library of every serious Catholic who desires to understand the work that Christ has done in the world through His Church and His faithful people.

In this book, Carroll holds true to his first principles and what he called “the watch words of Christendom College:” Truth exists and the Incarnation happened. The long-awaited sixth and final volume to the highly regarded History of Christendom covers the years 1815 through 2005. This series is the only in-print, comprehensive narration of Western history written from an orthodox Catholic perspective.

The book can be order directly from AmP Publisher’s Group, visit christendom.edu/crisis.

In an effort to pay tribute to Carroll, the Christendom College has announced plans for the beautification of the historian’s burial site on the College’s Front Royal campus.